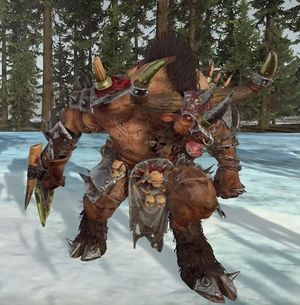 Doombulls, also known as as Minotaur Lords are the strongest and most ferocious of all Minotaurs, towering bull-headed and cloven-hoofed beasts almost as broad as they are tall. Little more intelligent than their lesser kin, they are instead set above others of their kind by the sheer animal intensity of their hunger for flesh, and their inherent ability to invoke this intense bloodlust in others.[1a]

As with human Champions, a Doombull may swear allegiance to a single Chaos god, or worship them all with equal fervour, and this is often reflected in their appearance. Doombulls of Khorne, sometimes called Bloodbulls, often have red-tinged flesh and fur, and their horns are sheathed in heavy brass. The Plaguebulls of Nurgle are fetid, bloated creatures, with gargantuan stomachs filled with corpse gas, and ridden with poxes and boils. Slaanbulls, who worship the god of extravagance Slaanesh, decorate their bodies with many gory trophies, and jewellery looted from others is hammered into their bare flesh and hung on their horns. Most bizarre are the Tzaanbulls, dedicated to the Lord of Magic, Tzeentch. Their brightly patterned skin, wreaths of twisting horns and an aura of crackling Chaos energy mark them out from others of their kind.[2a]

Though no master of strategy or battle doctrine, a Doombull is capable of leadership, of a sort. It is he that bellows the raw will of the Dark Ones, triggering a terrifying stampede that can only end when the horde's unnatural thirst is quenched with the blood of Man. As the Doombull's army smashes its way through the dark woods, the undergrowth is flattened and trees toppled all around. This is a truly horrifying sight for the occupants of any settlement in its path, for it spells certain and violent death. Yet even forewarned by the cacophony of the stampede's approach, the defenders of such fortifications are truly doomed, for the Doombull and his Minotaurs will be upon them in short order and their escape route is almost always barred by the gross mass of the warherd. Consumed by bloodgreed, the Minotaurs lay waste to their prey in an orgy of slaughter, smashing through barricades and buildings alike to get at the still-living weaklings that cower within. The Doombull at the head of the homed army lowers his head and charges at full speed towards the leader of the enemy army, gouging his horns deep into the foe and maiming everything within reach with his axe. When all is laid waste the Doombull gorges himself on the choicest of prey while his followers fight over the corpse-harvest at their feet.[1a]