Difference between revisions of "Dwarf Navy" 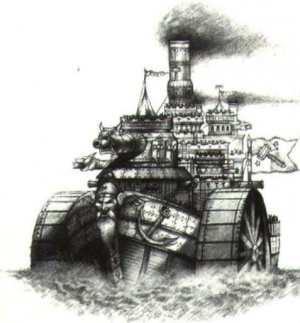 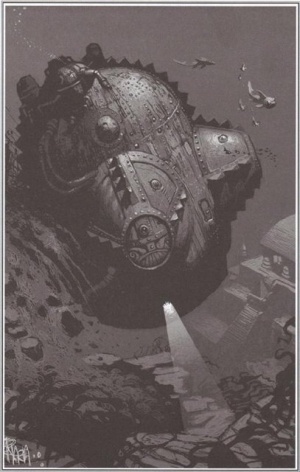 The Dwarf Navy covers all types of Dwarf vessels. All Dwarf ships are made of iron and powered by enormous steam engines.

There are relatively few Ironclad vessels in existence, and most can grouped into broad categories. Ironclad is sometimes used as a 'catch-all' phrase to describe all iron ships. The typical Ironclad is the equivalent of other race's galleys and ships of the line in size, although the category is a broad one. Each ship is a testament to the skill of the engineer who built it. Ironclads are able reach Lustria when fully provisioned.

Monitors are smaller than Ironclads, and are capable of patrolling rivers and inland lakes. They are rarely seen outside of the Black Gulf and the Tilean Sea.

Dreadnoughts are even larger than Ironclads, and each is a floating fortress, complete with massive cannon turrets, far larger than anything seen on land. Very few engineers are capable of creating a Dreadnought and the enormous cost prevents them from being built in large numbers. The greatest Kings of Barak Varr have marked their reigns by commissioning a Dreadnought and each is a mechanical marvel. The first Dreadnought was created by the legendary engineer Hengist Cragbrow and every one since has owed something to his vision.

Nautiluses are capable of travelling beneath the waves. The first Nautilus was created by Hengist Cragbrow's one-time apprentice, Mungrun Steelhammer. Steelhammer wanted to make a name for himself, but knew that he couldn't match the scale of a Dreadnought, so built something completely different instead. Other Nautiluses have been built since, but it was and still is, an invention way ahead of its time.