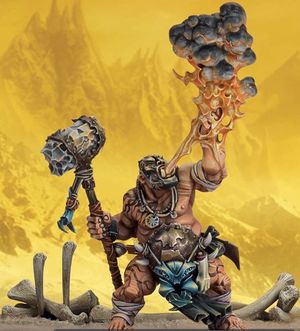 A Firebelly exhaling a (hopefully) small gout of flame.

While the Great Maw might be the most important Ogre deity, it is not the only one. Another powerful deity is the so-called Fire Mouth, who is served by priests known as Firebellies. These individuals are as unstable as fire itself; at times they are as lively and joyous as a welcome hearth, but they might just as well reflect the devastating nature of a bushfire.

Their kinship with fire does not stop at their mood. Every one of them can easily manipulate the Winds of Magic into crisp fireballs or clouds of roaring flames, causing great damage to the enemies of the Ogre-kin (or enemies of their employers). While the Bright Wizards of the Empire might match their abilities, they certainly cannot rival the sheer combat ferocity of a Firebelly, who, like any Ogre, can bash up plenty of enemies while their blows merely scratch his tattooed body. While numbers generally mean safety and victory, this is certainly not the case with the Firebelly. True to its name, it is able to exhale a cloud of ferocious flame, turning entire formations into heaps of charred bones.