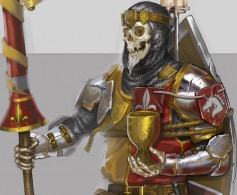 Still in all its wargear, the knight's body is seated on the shoulders of Battle Pilgrims, who seek to fulfill the role of his horse. This goes to the extent of the front Pilgrim carrying the blessed skull off the Knights former steed. Another six Pilgrims surround the reliquae, all there to protect it with their lives. The pilgrims devote themselves to this makeshift, portable shrine, supplicating themselves before it as if it were a living Grail Knight, praying for its divine blessing. To pilgrims, the Reliquae is the ultimate icon of their devotion to both the Lady of the Lake and her Knights, from which the chosen amongst them can preach their creed. There is never a shortage of listeners for these demagogues either, for at each town or village the common people flock to the Reliquae so that they might hear, in graphic detail, the latest tales and deeds of the heroic Knight who unintentionally leads the procession. This devotion doesn't go unrewarded; For such is the power of a Grail Knight, that the pilgrims are protected by his presence even in death. Receiving a blessing from the Lady herself and empowering any who stand near such a sacred artefact.[1]{[Fn|2}}