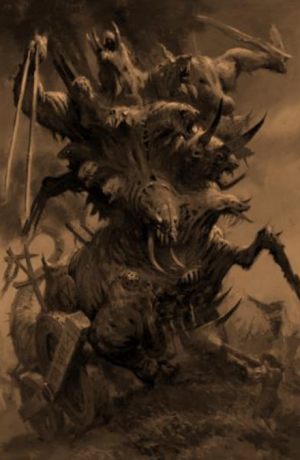 ation is the greatest and most horrific monstrosity the Skaven of Clan Moulder have ever created. The creature is a mountain of misshapen flesh that moves in a rippling tide of unnatural spasms, writhing worm-like and using its many limbs to pull and drag its hideous bulk forward. Various mechanical bits, such as wheels, cogs, and fluidpumps have been grafted into the beast to ensure it moves at optimal speed and that the warpstone mutated growth agents are regularly injected into the beast's hyper-fast metabolism.[1]