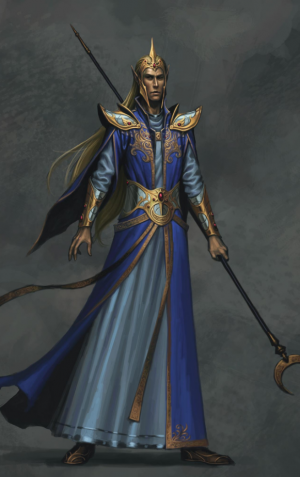 With a natural affinity to the Winds of Magic, they are far more powerful then even the most experience Imperial Battle Wizard. By lineage and inclination, the Elves are a magical race. They are fascinated by the secrets of sorcery, and their mages' nimble minds can embrace a deeper understanding of its subtleties and whims than other wizards. It is well that this is so, for without the magics of the High Elf Mages, Ulthuan would have long since have slipped beneath the waves or been overwhelmed by the black sorceries of Naggarothi sorcerers. [3a]

Indeed, not only Ulthuan, but the entire world owes much to the disciplined and selfless actions of High Elf mages. It is by their effort that the Great Vortex and the network of waystones that feed it are maintained, and the dread power of Chaos thus kept in abeyance. In Ulthuan, those who devote their lives to magic are treated with the highest respect and honour.[6a]

Though each kingdom has its own magical traditions and methods of scholarship, Saphery is the realm most famed for its mages, and it is at the White Tower of Hoeth that Ulthuan's seat of magical learning can be found. There, the greatest collection of mages, Loremasters and scholars in the world endeavor to perfect their mastery of the sorcerous arts. It is a place of wonders unbounded, where mages strive to harness every aspect of the Winds of Magic.[3a] [6a]

The robes of mages often bear the stars of the night sky -- a silent testament to Lileath, patron of dreamers and sages, and to Morai-Heg, the Crone Goddess who set the stars in the heaven.[2]

Before a promising young mage is taught the dangerous path of the True Magic, he will be shown some simple prayers and enchantments to bring down the blessings of the divine Isha. These are far less dangerous for the caster and can be safely employed by even the most untutored Elven Mage. These blessings are of limited use upon the battlefield, intended as they are to ease the burden of daily chores carried out by the aspirant, and allow the tutor-mages to assess the potential of their charges, showing who is most favoured by the gods.[5a]

It is said that the Elven farmers who live near the White Tower never plough their own fields, as every year there is another crop of novices eager to practice their skills.[5a]