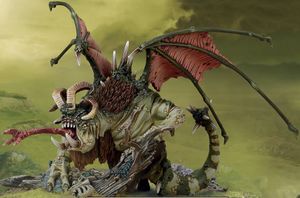 A Jabberslythe in its habitat.[1]

Jabberslythes are some of the most ancient creatures of the Warhammer world, and are certainly the most vile. They are an unwholesome union of toad, sludge-drake and insect, a creature so unearthly and grotesque that even the clearest of nature's pools will never reflect that abomination. Sentient creatures fare even worse, with many humans known to die of sheer shock or madness that the appearance of this creature invariably induces. Because of that, Beastmen Bray Shamans send them flying amidst the enemy as soon as possible, both to take advantage of its hideousness and to protect the sanity of their own herd.[1]

A Jabberslythe's mobility and hideousness is not its only powers. While inferior to Thundertusks or Ghorgons, it is still a very capable fighter, matching Varghulfs and Sun Dragons in strength and resilience, as well as sprouting poison. It also possesses a terrifying ability to simply "lick" a soldier (usually someone in charge) away from his regiment, the tongue shooting out with the precision of an Elf over considerable range, dragging the unfortunate into the creature's mouth. Most ironic, however, is the way many soldiers die right after landing a successful blow, eaten away by the gushing fountain of the creature's bile-blood.[1]