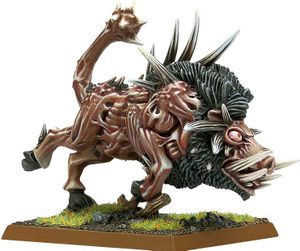 Razorgors are the terrifying boar abominations, far larger in size and consisting of bare, unskinned muscle, occasionally covered by the sprouts of coarse hair and home to the many spikes and tusks freely protruding from the body. The very sight of this drains the enemy spirits in a way a Skeleton phalanx might, as they try to brace themselves for the inevitable charge. Their fears are well-founded, as the creature rams into the regiment with enormous power, various tusks ripping flesh apart and piercing even the finest gromril, as though they were lances used by Chaos Knights.[1]

Once stopped inside a regiment, Razorgors lose the advantage of speed, though the ordinary soldier wouldn't really feel the difference, as the Razorgor easily equals the deranged Trolls in its brutish strength. It is also frighteningly hard to put down, shrugging off enough blows to slay an Ogre. However, this power has its price: such is the energy needed to sustain the beast's metabolism, that Razorgors can gobble an Imperial Knight and his noble mount in a matter of seconds.[1]

Lastly, while a single Razorgor is deadly enough on its own, they are rarely alone. While they're thankfully much rarer than their tamer cousins, Tuskgors, Beastmen tribes often amass whole herds of Razorgors, leading to a nigh-unstoppable force... assuming that they will stay on the battlefield. Being nothing but powerful beasts, the Razorgors aren't concerned about destroying civilisation, and if things happen to go against the tribe, they're more than likely to flee the battlefield.[1]