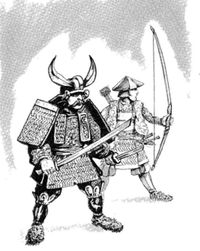 Samurai are the warrior caste of an old nations of the Nippon. They were not less cruel than their masters - the Shogun, though fortunatly for mundane citizen and travellers, they mostly fight each other and have little regards for other people.[1]

Some Samurai fight on foot, others, Samurai Cavalry prefer horseback - at least to start with. [2]

Samurai Lords and their retinue embarked on fleets of War Junks are sometimes dispersed by Typhoons and blown to foreign shores - once they arrive, they will often march to the nearest authority and pledge allegiance in exchange for food and shelter. Other lords deliberately leave Nippon and seek adventure in other lands. [3a]

As the Emperor lost control over the land, the Samurai became increasingly powerful, with settlements paying tax and providing them with milita in exchange for protection. [2]

During wartime Samurai lead the armies, which may consist of Ashigaru, who formed the backbone of most armies. Also in the army included a certain amount of Kamikaze Suicide Squads - warriors sworn to die gloriously in battle, so they enter into a state of rage and fight with the enemy to death. Sometimes Vim-to Monks joined the army. These strange people believe in Vim-tioism, the main principal of which - total dedication of mind and body, complete self deprivation and self-sacrifice; they immune to magic and not afraid of any enemies.[1]

Whilst they disdain the arquebus, some use flintlock pistols - known as Firelocks, which are attractively dangerous to both the user and the enemy they are fired at. [2]