Difference between revisions of "Skink" 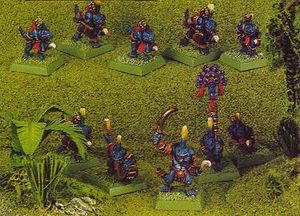 Skinks are a smaller race of Lizardmen, weaker and possessing less martial prowess than the larger Saurus. They are more likely to fight with poisoned Blowpipes or Javelins than with hand to hand weapons. Sometimes - especially in the Southlands - Skinks also utilisize Shortbows. Generally Skinks prefer - if forced to - to fight as skrimishers. If they form rank-and-file regiments, they are often accompanied by Kroxigors. Some Skinks drive Salamanders into battle, ride on flying Teradons or on a palaquin on the back of a giant Stegadon. A very special breed of Skinks are the so-called Chameleon Skinks, which are even more sneaky than the average Skink.

Skinks where created by the Old Ones merely not for fighting but to assist the Slann and work as architects, diplomats, interpreters, scribes ecetera. Some Skinks are gifted with magical power and become Skink Shamans.

Skinks marked by their snake god Sotek with his red mark are more warlike than others and sometimes even become Cold One Riders like Tichi-Huchi's Raiders who act as Dogs of War.