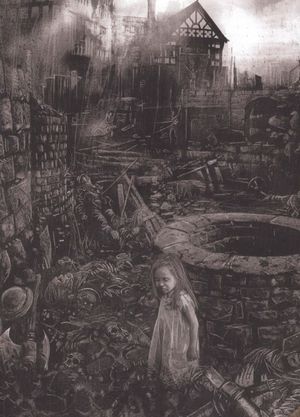 Not to be confused with Storm of Magic, a separate supplement released for 7th Edition Warhammer Fantasy.

The Storm Of Chaos was a campaign held by Games Workshop in 2004, where players of Warhammer Fantasy Battles 6th Edition could submit the results of their games and influence the outcome of a storyline. A supplement book was released to accompany the campaign called Warhammer: Storm of Chaos. Storm of Chaos told the story of a huge conflict, as the Chaos Champion Archaon led the biggest Chaos army since the time of Magnus the Pious in a massive invasion of the Old World. The fighting peaked during IC 2523, and although the Chaos forces were broken, the lands of The Empire were bloodied and broken, and came perilously close to being shattered. Archaon, Everchosen of Chaos, remains alive and a very real threat. The Storm of Chaos was considered canon, until recently the End Times supplements retconned it out of the lore.

The foundations of the Storm of Chaos invasion were set when Archaon, warlord of Chaos managed to obtain the Six Treasures of Chaos, thereby becoming the Everchosen of Chaos. Archaon gathered a mighty host of Chaos worshippers and united many tribes of Marauders and began sweeping south from the Chaos Wastes with the ultimate goal of crushing The Sigmarite Empire. Kislev was the first nation of Men to feel the wrath of the Storm of Chaos, leading to its devastation.

Meanwhile the Emperor Karl Franz was gathering men and allies together to counter the Storm of Chaos, in a great council known as the Conclave of Light which included not only men, but High Elves and Dwarfs aswell.

At the same time the prophet of Sigmar, Luthor Huss had discovered a young man by the name of Valten, who bore the same physical characteristics as Sigmar himself and was even as strong willed as the founder of the Empire. Valten also bore a birthmark shaped like a Twin-tailed comet which was the symbol of the Cult of Sigmar. Luthor Huss proclaimed the man the reincarnation of Sigmar, and they both marched towards Altdorf gathering thousands of fanatical followers as they went. Upon reaching Altdorf Luthor Huss demanded that Valten should be made Emperor as he was the reincarnation of the first Emperor and founder of the mighty Empire. Karl Franz was in a very difficult position, the Empire needed to be united and strong as Archaon was on the march, but whether he refused or accepted the request for Valten being proclaimed Emperor, either way the Empire would fragment with supporters of both men on either sides. Karl Franz, like the great politician he was found a way to divert the disaster, he proclaimed Valten the spiritual heir of Sigmar and granted him Ghal Maraz as a symbol of his authority.

The Storm of Chaos continued to shatter through the lands of Men and Archaon eventually reached the great city of the White Wolf; Middenheim. Upon arrival the Chaos Horde began to lay siege to the city. However they were soon forced to lift the siege because of the impending arrival of the armies of Bretonnia, Kislev, Karl Franz, and also the Greenskins.

The armies of the empire, led by Valten, met the hordes of chaos in a massive battle to decide the fate of the realm. The two great armies ravaged each other and soon Valten and Archaon found themselves face to face. Valten slew Archaon's steed with a mighty blow from the hammer of Sigmar as retribution for the Chaos hordes slaying his own steed with a blast from a cannon. Archaon dismounted and the duel began. The champions battle long and hard but eventually Archaon gained the upper hand. With a blow from his dameon blade he struck Valten and tore through his armor. Upon this the Lord Of the Endtimes saw the birthmark upon the warrior's chest and backed away in horror. Luthor Huss saw this as an opportunity and assaulted the shocked Chaos champion and dealt several blows towards him. Archaon hit the Huss with his right hand and sent him flying over the battlefield. Immediately after this the Orc Warlord Grimgor Ironhide saw this as an opportunity to prove his supremacy and assaulted Archaon. Upon seeing their own allies turn upon them, the Chaos army began to falter. The Orc defeated Archaon but did not slay him, instead Grimgor stood triumphant over the Everchosen and proclaimed "Grimgor iz da best!". After this defeat the Chaos Warlord led his army in a retreat.