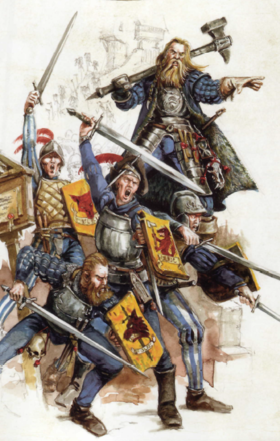 The Swords of Ulric, also known as the Sons of Ulric are an Empire Swordsman Regiment of Renown from Middenland of Templar's and fanatics dedicated and funded by the Ulrican Church of Middenheim. The formidable training of the Swords of Ulric consists not of marches or military drills, but instead on patrols and war parties led out of the city itself and into the hazardous regions of the Drakwald Forest, where they hunt out the tribes of beastmen that have taken residence in the land. Initiates hoping to join this famed regiment must accompany such excursions into the forest; only those that fight with honor (and survive) in the gruesome endeavour shall be admitted into the regiment.

It is left to each soldier to equip himself in the blue and white colours of Middenland, but once he becomes a full member, most of the funding for equipment and supplies are administrated by the Temple of Ulric. Since the regiments founding, in the days when Elector Count Mandred Skavenslayer rallied the Empire behind him and became Emperor, the Sons of Ulric have borne yellow shields into battle, a tradition that still hold true today. Also by tradition, each shield must bear a variation of the same device; a red wolf, signifying Ulric embattled. The grim northerners have little room for formal ceremony, but what they lack in parade-ground discipline, they make up for with uncommon savagry and dedication on the battlefield.