Difference between revisions of "Ulric" 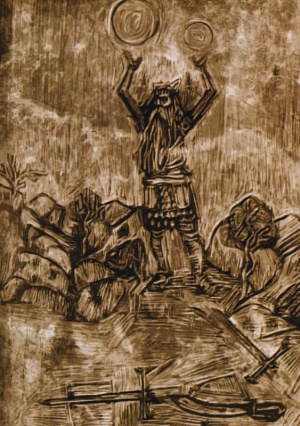 Ulric is the god of Battle, Wolves, and Winter. He is the younger brother of Taal and both of them are sons of the Earth Mother.

He is portrayed as a massive warrior, armoured in the style of the barbarians who inhabited The Empire several centuries ago, wearing a silver grey wolf-skin cloak. He can also take the form of a huge silver-grey wolf. One of his symbols is the White Wolf and his favoured weapon is the warhammer.

His holy days is the autumn equinox, the winter solstice, and spring equinox. Holy days are spent holding military parades and huge bonfires.

Ulric is a distant, harsh and unforgiving god, who expects his followers to stand on their own two feet, putting their faith in martial prowess. He is the fiercest and most barbaric of the civilized gods and fiercely independent, the embodiment of strength, honour, and courage, demanding and expecting nothing less from his followers.

He praises courage, individual valour, and ferocity and despises weakness, cowardice, and trickery. In the cold northern lands, he challenges each man to survive on his own, and as the Lord of Wolves, is a symbol of the relentless hunter who separates the weak from the strong (and the Ravening Wolf of Winter's Hunger).

Bonfires are held as sacred, and the fire of a shrine or temple should never be allowed to go out. Chaos is to be opposed wherever you see it.

War is good, for Man achieves his full potential in conflict. Man must rely on himself, for the Elder races are decadent, weak, and dying.

Bravery is held as the highest virtue and Ulric expects his followers to always take the direct approach to solving a problem, as a true warrior needs no trickery.

Ulric praises those who place individual valour above all else and seek berserk frenzy in battle. A honourable kill is to be made in close combat and those that kill from a distance are disliked. Devout followers are expected to avoid the use of such weapons, which are considered dishonourable.

Worshipped by warriors and soldiers, Ulric has many followers in the north of the Old World. His cult is strong in the Empire, very strong in Middenland, and strongest in Middenheim.

Middenheim is the spiritual centre of his cult, and the home of the Ar-Ulric, the high priest of Ulric. The Ar Ulric is also an Elector, a very influential and important person in the Empire.

The city is fiercely protected by the powerful Knights of the White Wolf, proud warriors and respected champions of Ulric.

In the south of the Old World Ulric's cult is largely over-shadowed by the cult of Myrmidia, the goddess of Strategy and War, who also doesn't share Ulric's view regarding range weapons. This naturally creates some rivalry between the two gods and their respective cults.

However both deities are active opponents of the powers of Chaos and natural allies; as such their rivalry is mostly shown in a competition as their followers fight against the minions of Chaos.

For obvious reasons he rather despises Ranald, the god of Tricksters and Thieves.

Once a worthy follower of Ulric has died his spirit is taken to live in a forest forever covered in winter. There he will hunt with a pack of wolves and fight in berserker frenzy against the other spirit of fallen men that have been granted the blessing of reaching this sacred forest. The spirits will kill each other or themselves be killed each day but also every day they all rise again to repeat the process and to live, fight and die forever. In between the fighting the soul is allowed to rest in the warm pecans of an endless feast filled with beer, women and food.