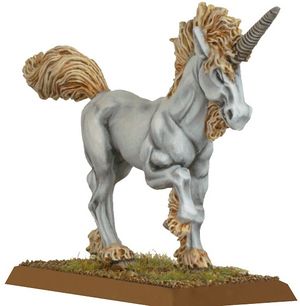 Unicorns are renown for their elegance and grace, which makes them look peaceful. However, they are arrogant and as such unpredictable creatures, who do not mind using their cream hooves to molest a person to death and they are likely to enjoy skewering creatures on their single horn simply to show its power. Unlike horses, they are solitary creatures.1

Storm of Magic is a rare occasion when enough power is gathered to allow Warhammer armies to harness its power for combat, often bonding several of them into a small but powerful unit to distract enemy troops from the main army.1