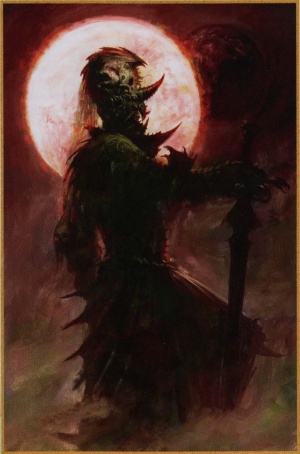 Abhorash is one of the very first Vampires, going on to sire many of the most martial and combative blood drinkers in history. He was the first and greatest of the Blood Knights, who are among the mightiest warriors in the world.

He was called the Red Dragon by the people of Mourkain as he wore ornate, red stained iron armour like the scales of a Dragon. [1b]

Tall and muscular with a broad, heavy boned face. [2a]

Abhorash was the greatest warrior of Lahmia and held honour above all else. He was part of the cabal the king formed to study the books of Nagash and the captive Arkhan. [2a] The champion remained secretly loyal to the king Lamashizzar when the queen Neferata siezed power in -1599 IC, haing accepted her offer that he would have eternity to perfect his martial skills. [2b]

A year later and took part in the plan to assassinate her, when Neferata's partner Arkhan the Black took revenge and slew the king, it was Abhorrash who slew the necromancer in turn, but not before the liche helped Neferata become the first vampire. [2c] He and W'soran wanted the decapitated corpse of Arkhan be burned but Neferata refused and had him interned instead in a tomb. [2d]

In -1597 IC, at the great council of the rulers of Nehekhara, Khalida claimed that Neferata was a necromancer and challenged her to a duel. As her champion, Abhorash gave her a bronze sword rather than an iron one, knowing it would suit her speed and agility better and telling her not to hold back, but to kill her cousin or be killed herself. [2e]

When Neferata tainted the nobles of her court with vampirism, Abhorash had to be tricked into drinking her blood, refusing her offer for more than a decade. Initially he refused to feed on the blood of his own people, and desperately fought to control his fury: eventually however, his thirst grew so great that he slaughtered a dozen men and women in one night of gore. He then fled the city and avoided contact - although he was spotted by Ushoran's spies in Rasetra in -1351 IC. [2e]

It is said that he wept tears of blood for the poor souls he had murdered to save himself, and vowed to prey only on the desert-dwelling natives and not the people of Lahmia. He also tried to convince his vampiric kin to do the same, for fear they would turn the peoples of Khemri against them, but in their arrogance, they did not listen, and their actions only roused the hate and fury of the other kings of Nehekhara against them. [3a]

Despite leaving in disgust and travelling for some time, Abhorash was at the front of Lahmia's defence when the united Priest Kings attacked and slew hundreds of their warriors, until the steps of the royal palace and Neferata's temple were covered in blood. Despite his great fighting abilities, the armies of the Priest Kings were too many to defeat: Lahmia was sacked, its people enslaved or killed, and the undead aristocrats hunted down and put to the sword. [3a]

In -1152 IC he helped defend the city of Bel Aliad from desert tribes led by Neferata and her handmaidens, impaling her on a lance himself. [1c]

As the few remaining vampires gathered up as much wealth and riches as they could and fled surrounded by hordes of their minions, Abhorash cursed his arrogant brothers who had brought destruction upon his beloved city, and set off followed by only a few loyal warriors and carrying only his weapons and armour, in exile. He taught his followers that skill in close combat and honour in battle were the only measures of greatness and they would only drink from great fighters, saying that only the impure fed on the weak.

As with many vampires Abhorash was compelled to travel to Mourkain, capital of the Strygos Empire. Here the vampire Ushoran, another of Neferata's inner circle, had created a new Lahmia, an empire of the dead ruled by it's vampiric aristocracy.

In -800 IC and seeking Razek Silverfoot, he again encountered Neferata who had already saved the Dwarf Thane from Beastmen and had nearly killed Vorag Bloodytooth for insulting her. After the situation was diffused, she and her companions travelled with him back to Mourkain. [1a] He was one of the defenders of the city in -600 IC when a huge Orc horde attacked, having been recalled from the empires eastern frontier where he had been fighting Ogre tribes - in the battle he killed a Giant on his own, having formulated the battle plan to defeat them. [1d]

Abhorash served loyally until the empire's eventual destruction by greenskins. How he and his own followers survived is unknown.

Eventually in 253 IC [4a] his travels took him to a great mountain wreathed with eternal flames; ignoring the advice of all of his followers Abhorash scaled the side of this fiery mountain. As he reached its summit, a red dragon of immense size emerged from the crater and descended upon the vampire lord. At the prospect of testing his martial abilities, Abhorash drew his sword and prepared to fight the great wyrm. The two fought the entire night and in the end the Vampire was victorious. [3a]

As the dragon lashed in its death throes, Abhorash seized its throat with his fangs and drank deep. Intoxicated by the blood of the dragon, Abhorash cast the carcass of the broken creature down from the mountain top. His search had ended; he no longer craved the lifeblood of men and had become the ultimate warrior, a man with the strength of a Vampire who had no need for blood. He then dispatched his followers to go forth into the world and charged them to master the arts of combat to such a skill that they could overcome their bloody thirst as he had. When they had succeeded, he would call them back to him, and they would go to war. [3a]

It is said Abhorash still waits at the mountain, waiting for the day when his followers can rejoin him. [3a]

At some point Abhorash encountered the mythic Grail Companions and their leader, Gilles le Breton. The two mighty warriors dueled, resulting in Abhorash swearing an oath of service to the Bretonnian. He later helped with the construction of la Maisontaal Abbey as payment of his debt to Gilles. It was implied that during the destruction of the world at the End Times Abhorash was fighting alongside the returned Gilles in Bretonnia. His fate following the end of the world is unknown.

Some of Abhorash's most infamous "children" include;

In ancient Lahmia, he carried a pair of iron swords rather than the usual bronze. [2c]