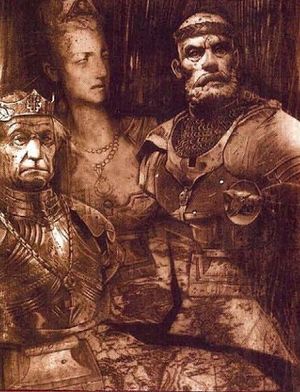 Busts of the Three Emperors

The Age of Three Emperors, sometimes called the Time of Three Emperors[1a][1b][1f], was a centuries-long period of civil war in The Empire. It began technically in 1547 and ended officially with the election and crowning of Magnus the Pious in 2304[1c][1e][2b][2c][3a][3b].

The assassination of Mandred Skavenslayer in 1152[1d][2a][2c] led to a serious political crisis: the Electors simply could not agree upon a successor and failed to choose a new Emperor.

The absence of a central and unifying authority inevitably led to political turmoil as the provinces became full sovereign states in all but name. The rivalry between the powerful Elector Counts slowly increased as the more ambitious among them tried to gather support, each believing that he should become the next emperor.

The Count of Stirland managed to get himself elected in 1359[4a]. Countess Ottilia of Talabecland, his fiercest rival, accused him of bribing several Elector counts and denounced the whole election as a sham. Gathering several important supporters, first among them the Ar-Ulric[4a], she proclaimed herself Empress Ottilia I in 1360[1a][2c][3a]. Civil war was inevitable.

Stirland, determined to crush this challenge to his authority, invaded Talabecland at the head of a powerful army. In the ensuing Battle of the Talabec [4b], he suffered a humiliating defeat at the hands of a severely outnumbered army led by the Countess. This major defeat cost him most of his political support.

The Elector Count of Nordland managed to hold peace negotiations between the two parties at his stronghold in Salzenmund in 1375[5]. An army of daemons of Khorne appeared unexpectedly, slaying all participants. Blaming each other for the slaughter, the two feuding sides escalated the civil war.

For the following nearly 200 years The Empire was effectively divided among two feuding rulers:

Desperate war-refugees fled to the safety of the fortified cities which increased in size, population and importance. Increasing populations meant numerous recruits and larger taxes, and the burgomeisters of the more important cities were able to slowly but steadily increase their autonomy[2a][2c][3c][4c]. Some cities even began to recruit and equip their own troops.

It is likely that most of the Elector counts were largely satisfied with the status-quo, content to rule their own independent realms. If a count had a personal quarrel with one of the candidates he could easily avenge himself by pledging his allegiance to a rival emperor. Feuding counts would usually support different candidates. Ambitious counts could support an "emperor" only to switch their support in favour of another in return of a hefty bribe. This forced weak candidates to constantly reward their supporters in an attempt to solidify their loyalty.Needs Citation

The Grand Theogonist refused to acknowledge the election of the infant Countess Magritta of Marienburg in 1979[1a][1e][2a][2c][3a]. This act ended the line of elected Emperors. Needs Citation

During the Wars of the Vampire Counts, which began in 2010 and ended in 2145, the claimants were: