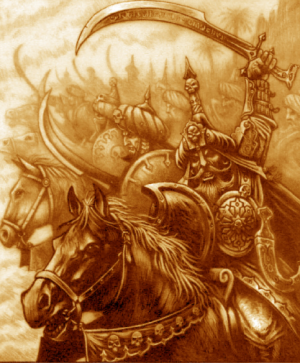 Al Muktar's Desert Dogs are a famous band of Desert Riders and Dogs of War mercenaries that hail from the arid-deserts of great Araby. [1a]

A band of bandit's and mercenaries as well as experienced raider's and skirmisher's often raiding isolated villages, and caravans, while riding in calvary and wearing light armour or leather to make them agile in their attacks. Also this Mercenary band is almost all composed of Arabyan corsairs or bandits from the inner deserts, where tribes of vicious warriors on camel-back raid the rich and fertile lands of Araby. This group however is lead by a foreigner, a man of the Empire, once known as Werner Glook, a former son of a rich and aristocratic noblemen and merchant of the great City-State of Marienburg. [1a]

Young Werner Glook was sent by his parents to an exclusive school in Marienburg - a common fate for children of rich and famous parents who couldn't be bothered to raise their off-spring for themselves. As a consequence, childhood was a lonely and deeply unhappy time for him. The school master's beat him frequently and the older boys adopted him as their personal slave. Werner lived in constant anticipation of a sound thrashing. He learned to endure things by immersing himself in dreams of foreign lands and exotic life. [1a]

Years later stepped from a Tilean merchant ship onto the harbour of Laskeik - City of the Arabyan Corsairs. His eagerness to travel the World had brough him to the greatest city in Araby. Swarthy - skinned boys dressed in rags scampered about his feet, offering to carry his bags and attempting to pick his pockets. He sent them away with a single word of command. The boy gawped in amazement and ran away quickly. They did not expected a blond-haired, blue-eyed stranger to speak their language - let alone to be so familiar with the coarse vernacular of Araby. Perhaps he was no ordinary stranger at all, but the mysterious Al Muktar - The Chosen One - whose coming was foretold that very year. [1a]

Werner knew nothing of this old legend. He was gratified to find the people of Araby friendly and generous - at least once he had spoken to them after which they generally stopped trying to steal his belongings. Words began to spread throughout the city, but Werner remained oblivious to his growing fame. One day he decided to undertake a journey out into the desert to see some famous ruins. He hired guides and camels, and set out eastward. After three days the caraven was attacked by bandits. Werner guides ran off as soon as the bandits attacked, except for blind Ibn the beggar boy who didn't realize what was going on until it was too late, and then ran in exactly the wrong direction and was easily caught. Werner being to obstinate to flee, was captured after a fierce fight in which he gave a fine display of fist fighting - a skill necessary in his school days. [1a]

The bandit leader was Sheikh Almed Shuffti, a squinted-eye son of a sand, dressed like his warriors in voluminous flowing robes. The Sheikh had never seen an Old Worlder before, but was impressed by his captives's plunk. The Sheikh decided to stake out Werner in the desert and beat him to death slowly over several days. Whilst they were entertaining by his cries and pitiful pleading, the bandits would roast one of the camels. After three days of torture and no water, Werner had uttered not one cry of pain and the only words he had spoken were to defy his captors and curse their closer relatives. The Sheik was impressed, and his men were getting a bit nervous. Surely no ordinary men could endure so much pain. They were not to know that Werner was used to beatings, having suffered far worse at the hands of his fellow pupils at school. Once they had hung him for three days in the flue of the great chimeny in the headmaster's study... He had not uttered a word then either, not even when old Meistergriek had lit the fire to warm his old bones. [1a]

Werner could hear the bandits muttering about "Al Muktar" but he had no idea that it meant "Chosen One". "Al Muktarrr", he cried out loudly as he could. The bandits, who were huddled around their camp fire, had grown scared of the Old Worlder after Ibn had told them about the legend and various wonderous things he had supposedly done in Lashiek. Also, things had begun to mysteriously disappear, mostly small valuable possessions, and Ibn was careful to explain that this was a sure sign that the bandits had fallen under Al Muktar's curse. Consequently, when they heard Werner's cry they threw themselves to the ground wailing and crying for forgiveness. [1a]

Needless to say Werner did forgive them. In fact he became one of them - the life of a desert warrior sounded adventerous and exciting. He abandoned his old names, cloths, and habits and became Al Muktar. Soon the bandits were known and feared all along the coast of Araby. They became renowned as the Desert Dogs - horsemen of unparalled ferocity wielding mighty scimitars of gleaming steel. Their battle-cry of "Al Muktar" became feared throughout the world. [1a]

Soon the Desert Dogs became such a nuisance that the Sheikh of Lasheik was compelled to hire them by means of large bribes. At first he sent them eastwards to fight the Undead. Al Muktar very enjoyed travelling the lands of the Undead, but the Desert Dogs grew restless, and soon he led them northwards through the Badlands and into the Border Princes. The dashing horsemen proved ideally suited to the fast, mobile kind of warfare in the pioneer country, and Al Muktar was soon famous in the frontiers of the Old World as he was in Araby. [1a]

Only the continued dissapearance of small but valuable items from the pockets and saddlebags of the Desert Dogs continued to trouble the warriors. Plainly they might fight harder and more loyally to end the curse that this mistreatment of Al Muktar had invoked. [1a]

The Desert Dogs can be hired by any army except Bretonnia and the Tomb Kings of Khemri. [2a]