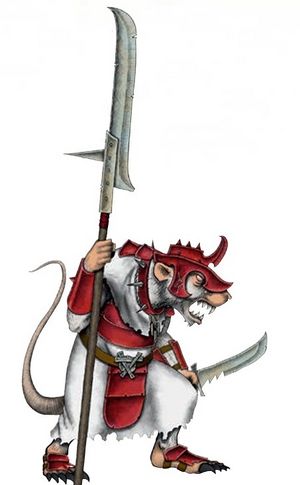 Albino Stormvermin also known as the Council Guard are the mightiest of Skaven warriors, huge mute bodyguards who protect the Council of Thirteen.[1a][2a]

Albino Stormvermin are one of the greatest and most disciplined military force within the Under-Empire, taken from birth due to their albino coloration and trained by the Council of Thirteen to be near incorruptible and loyal bodyguards and warriors. These warriors are some of the best the Council has to offer, and serve as a symbol of power and prestige to those that have them as their bodyguards, for it would mean that the Skaven holds sway to the Council's favor. These warriors are as large as any Warlord, but possess a near alien level of obedience and loyalty to those they protect. One of their most known characteristics is that they are mute, perhaps as a way to ensure that should one of their numbers defect, they will not be able to compromise Council secrets. [1a]

Grey Seer Thanquol was accompanied by two in his mission to Under-Altdorf to recover the Wormstone. [1a]