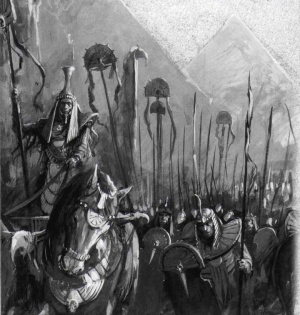 Alcadizaar the Conqueror was, some might say, the second greatest leader of Nehekhara, and in a sense, the saviour of the world. [1]

He is second only to the great king Settra in his conquests but his name has fallen from history, much as the rest of Nehekharan history. By slaying Nagash he saved the world from domination by the Undead. He was the last living king of Khemri (and Nehekhara).[1]

He was dark haired with a square jaw, strong cheekbones, a sharp nose and dark intense eyes which could be ofset with his disarming smile. [3b]

In -1350 IC His mother, Hathor the Queen of Rasetra travelled to Lahmia to offer prayers to Asaph for the safety of her unborn son and was offered an Elixir by Neferata, then considered the avatar of the Goddess. [3a] She drank a vial every week and the child born was indeed healthy and quickly grew tall and strong [3b] with other royal children in Lahmia, lavished with the best of everything. [3b][4a] His mother died in childbirth three years after his birth. [4a]

Word came to Neferata in -1325 IC that his father, King Aten-heru [4a] wished him to return and begin taking up duties as ruler of Khemri but Neferata refused, despite warnings from Lord Ankhat that it would further iritate the king of Rasetra and the other rulers whose children were guests in Lahmia. [3b]

He was taught military tactics by Jabari, a former Master of Horse in Rasetra. In -1325 IC he was summoned with his uncle Khenti by the High Priestess of the Lahmian Cult, Neferata. She offered Alcadizzar a new spiritual union between Khemri and Lahmia although he would need to serve in the Temple of Blood for years to become a Priest King. He accepted. [4b]

It was not until -1295 IC that he completed his training, becoming a high priest of the Lahmian Cult. [4c] However as he walked in the gardens of the Temple of Blood, Naaima appeared to tell the prince that his father had died, leaving the throne of Rasetra to his younger brother, Asar. She pressed him to leave and take the throne of Khemri, enraging Neferata who ordered him to offer up prayers to the goddess in the Inner Sanctum. [4d]

As he suffered through his final trial, Alcadizzar realised that he did not want to be a priest but a king, a mighty king and a conqueror not spend his days pondering the mystery of some esoteric cult. He was given a more potent version of the Elixir of Life than he had had before and then underwent terrible tortures to prove his worthiness in the Trial of Rebirth, culminating in being stabbed through the heart - but he did not die. [4e]

Awakening, Neferata offered him a cup of blood to complete his healing, but he hesitated and when the High Priestess tried to compel him to drink, it was only the intervention of Ubaid that saved him. He attacked her, tearing into her eyes with his nails, breaking Neferata's hypnotic gaze. Enraged, Neferata tore the old mans head off and the prince fled, determined to warn the rest of Nehekhara about the truth behind the cult. [4e]

For the next eight months he managed only to survive in Lahmia's busy docks, quckly becoming a killer, gaining employment as hired muscle for a notorious brothel. He also met his first love, a thief who died leaving him with a kiss and handful of coin - shortly after he managed to slip out of the city and after months of hard travel, finally reached Rasetra. [4f]

He found that the city was prospering under King Asar but when he told his story over strong southern wine, his younger brother asked him Where is your proof? He conformed that although he believed him, to build the alliance of cities needed to fight the power of Lahmia required proof. Alcadizear formulated a plan over the next six months and then travelled to Lybaras and then to Lahmia. Once there, he found that the city was deserted in fear after dark and the search for him continued - encountering the city guard he was forced to cut his way out once more onto the Golden Plain. [4f]

Escaping mounted searchers, he fled deep into the abandoned farmland - the domain of bandits. Using the name Ubaid and posing as a former soldier of Lahmia, he tried to join one of the bands of desert tribesmen - the Nazir (Desert Lions) but they would have none of it so he joined a bandit gang led by Nawat ben Hazar hoping the former tribesman would help him grow closer to his kin. [4f]

When desert raiders attacked a caravan, Nawat hopd to scavenge their leavings but it proved to be a trap - Alcadizzar saw that the leader of the tribesmen's horse had been killed and rode in, killing a number of Lahmian soldiers before they noticed him. He grabbed the young chieftain, riding through the arriving cavalry and escaping. The rescued man was Fasir al-Hashim of the Bani-al-Hashim and when he offered a reward, Alcadizaar asked to be allowed to ride with them. [4f]

Over the next twenty-five years he became a valued advisor and councillor to Fasir especially given his knowledge of the Lahmian military [4g] killing more than fifty enemies and saving Fasir's life three times. Finally in -1265 IC when the tribe travelled to a great meeting of the tribes he was presented to the other chiefs as a candidate for adoption by the tribe. However, it was only through the intervention of Suleima, then Daughter of the Sands that this was achieved without violence. [4h]

In -1200 IC he and warriors of the Bani-al-Hashim intercepted the vampire Zurhas and his escorts travelling from Lahmia to try and forge an alliance with Nagash, gaining him the proof he needed. [4i] He dispatched the head and letters to his brother who called upon the other rulers of Nehekhara to gather and march upon Lahmia and its undead rulers. [4j]

A huge army was gathered on the Golden Plain from Ka-Sabar, Khemri, Mahrak, Numas, Quatar, Rasetra, Zandri as well as the tribes of the desert. [4j] At the camp he was created as king of Khemri by Inofre, Grand Vizier of the city and leader of the army. [4j] Following his victory at the Siege of Lahmia, Alcadizzar was encamped on the Golden Plain where he hosted the other rulers as the tribes celebrated the renewel of their sacred oath. There he met and fell in love with Khalida, a thirty year maiden of the desert tribes. [4l]

At the camp he forged alliances with Ka-Sabar, Lybaras and Quatar, but kept Mahrak at arms length and established an understanding with his ambitious neighbours Numas and Zandri. [4l]

Alcadizzar married a woman of the desert tribes, Khalida and they ruled together, moving their thrones together and to the same level to show this to their people. [4m]

His reign was highly successful as he reunited Nehekhara under an iron grip. The rulers of Zandri, Numas, Mahrak, Lybaras and Rasetra all bowed their heads to him and offered the greatest of tributes. He was a wise ruler and the region experienced great prosperity and joy.[1] He also improved the roads and other infrastructure, education across Nehekhara, founded a collegium of Magic in Khemri and commissioned Ka-Sabar to forge enchanted weapons and armour each year to be stored for the conflict to come. Exploration was also encouraged. [4m]

Despite the relative untity, relations between the king and the rulers of the other cities grew strained as the decades passed with no sign of Nagash. The cost of the preperation for the inevitable war drained resources also drew increasing complaints. War errupted between Zandri and Khemri in -1168 IC which saw Zandri defeated after a hard campaign with Alcadizzar them forced to rebuild it after King Rakh-an-atum fled. As he was forced to spend more and more time away from home where his wife ruled for them, their own relationship grew strained as well. [4m]

In -1163 IC, Nagash sent a huge army under Arkhan and W'soran to enact the long prepared plan to defeat the dead was put in action. Whilst the armies of Ka-Sabar and Rasetra marched to confront the horde before Lybaras, Alcadizzar gathered his armies plus those of Numas, Zandri and the Desert Tribes, heading towards the Gates of the Dawn, where it was hoped the dead could be first held and then destroyed. [4m]

Then Nagash returned from exile. In a series of titanic battles, Alcadizaar pushed Nagash back to his realm of Nagashizzar. Even slaying his Vampiric general, Vashanesh. Nagash had underestimated this great general, but he would not do it again.[1]

Cursed Lahmia was conquered, sacked and its people enslaved, but from then on plague racked the country. The rivers ran red with blood and poison and every living thing suffered. The Liche Priests were the only unaffected people as they were beyond death. This is when the land became desolate, the dead outnumbering the living. Alcadizaar sat upon his throne and wept, for he could not fight this enemy with swords and arrows.[1]

Then, for a second time, Nagash came and this time easily swept aside the ragged and thinned defenders. Alcadizaar was carried off in chains to the palace of Nagash.[1]

Nagash then cast his spell, turning the dead to living and under his rule. He missed one person however; Alcadizaar was languishing in Nagash's cell, safe from the deadly power he was unleashing. He was released from his prison by the Skaven, who also handed him the Fellblade. Alcadizzar ran to the throne room where Nagash was recovering from his spell casting. Even though Nagash was weak, he was still a powerful swordsman. Eventually Alcadizaar wore him down until he was slain, ending the threat of eternal servitude by the ancient, long dead, kings of Nehekhara.[1][2]

Alcadizaar leaves the history books, possibly due to losing his mind over the grief and destruction of his land, and being the only member of Nehekhara still alive.[1]

He stumbled into the mountains, broken, burnt and naked but unable to die until his soul was torn out of his body but the Crown of Sorcery he carried with him. He was found by Kadon who bound his soul and the fragment of Nagash back to his body before returning with it to Mourkain. [2a]

He was gifted with a suit of gleeming golden armour given to him by the dwarfs. [4o]

In the Rise of Nagash anthology his name is Alcadizzar.