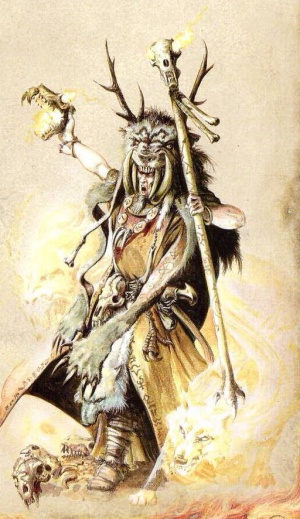 The Amber Order is one of the eight Imperial Colleges of Magic. [2a]

Amber wizards are one with the wild, attempting to become closer with nature and avoiding towns and cities as much as possible. As a result, Amber wizards are often solitary individuals spending time with wild animals more than other humans. The Lore of Magic they study is the Lore of Beasts.[2a]

Famously plainspoken, Amber Wizards also prefer direct action - especially in battle as they believe that to prevaricate is to show weakness. [1a][2a]

Many Amber Wizards adorn themselves with charms and totems such as animal skulls, bones, feathers, fur and hides whilst their staffs tend to be of wood or bone, hung with further charms and totems. As they grow more powerful they grow to look like the shaman’s ideal creature, a bear, eagle, or wolf, and often their personality will match. [2a]

The only order that keeps no college building in Altdorf, but instead, the Masters of the Order inhabit caves that lie to the south of the city in the Amber Hills. A rocky, wooded area, unsuitable for agriculture, the caves are not easily found, and visitors are not welcomed. [2a]

Many villages in the Empire has a story of a local monster, giant, or witch who lives in the forest and is to be feared but is seldom encountered. Often this is an Amber Wizard who has found a place they like and settled there. Most are more comfortable on their own but equally many are kind enough to help and advise local communities when they need it. [2a]

There is no formal system for entering the order as an apprentice as Amber Wizards are always on the lookout for those who have a spark of the magical about them and an instinct for the wild. Youngsters with the gift often feel the call of the wild and seek out an Amber Wizard to learn from and life as an apprentice is hard however if they thrive among nature they wull find themselves as comfortably as anyone in a great house. [2a]

The Amber Brotherhood is alomst unique in the Empire by having regular and cordial relations with the Wood Elves of Laurelorn Forest. They often visit the Eonir to exchange news and views being more sympathetic to their long term aims and strategies and consequently Amber Wizards are among the few Humans to be granted genuine respect by the Elves. [2b]

They also have strong links with the Cult of Taal, the god who many shamans venerate above all others. Priests and shamans often come into contact but their interests are usually aligned and find it easy enough to cooperate. Some claim that the itinerant priests of Taal are indistinguishable from shamans. [2b]

The Amber Order is very friendly with the Jade Order who can be relied upon to advance the Amber point of view among the colleges in Altdorf, when, as is often the case, members of the Order are not present to fight their own corner. There are also spaces within the Jade College in Altdorf where Amber Wizards are welcome to stay. [2b]