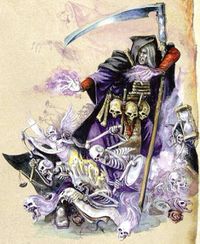 A wizard of the Amethyst Order.

The Amethyst Order is one of the eight Imperial Colleges of Magic.

Amethyst wizards are one with the dead, and as a result have a fearsome reputation - so much that members of the order are shunned by the inhabitants of Altdorf but there are those who crave contact with departed loved ones or those dead souls whose secrets they wish to learn. Amethyst wizards are able to communicate with the spirits of the dead and to help facilitate this the Amethyst building of the college overlooks the old Altdorf cemetery, but must avoid any association with Necromancy. The Amethyst Order also have the power to deal death, suck the life from an enemy, leaving nought but a husk or casting a wind of death that withers flesh. [4a]

Wizards of the Order are also known as Spiriters. [4a]

Shyish can have varied effects upon mages and for many, the effect is physical, the body growing gaunt and pale like a corpse, their hair growing limp and patchy, until most shave it off. Shyish can affect the personality with some magisters grow cold and clinical whilst others are morose and lock themselves away behind the college walls as much as possible. [4a]

The Order is strongly allied with the Jade Order with their two patriarchs often combining in any matters concerning the colleges. The Cult of Morr has many links and work with the Order but there are also tensions as some priests suspect their magic is disguised Necromancy and so the cult cooperates in order to keep a close eye on the Order. [4a]

The Lore of Magic they study is the Lore of Death.