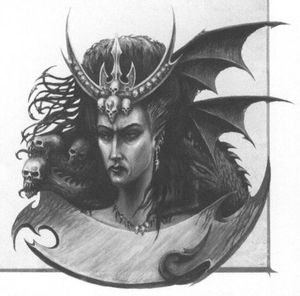 Anethra has been an ally of Morathi since the Sundering when she ruled the fortress city of Athil Khairn which she transformed into the Black Ark Temple of Spite.[1a]

Together with her husband, Kedhron Helbane she fought alongside the Witch King against the Phoenix King Caledor I, although Kedhron was slain at the Second Battle of Nagar. His brother attempted to take control of the Temple of Spite, but she swiftly revealed he was part of a plot to poison Morathi, although in reality it was Anethra who had engineered it. [1a]

She would later join Morathi in the city of Ghrond and in founding the Dark Convent, but also constructed a powerful dynasty, aided by her only son Nurekh Helbane. [1a]

Now she dwells in a great mansion in Clar Karond further increasing her power and wealth and that of her large extended family. [1a]

Over the course of her five thousand years of her life, Morathi has taught her many rituals and pacts to increase her power and pre-long her life. [1a]