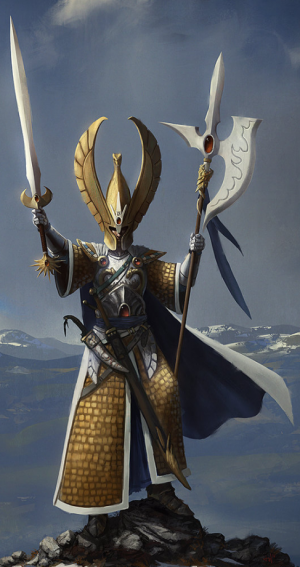 The Anointed of Asuryan are the greatest and most powerful of the High Elves Phoenix Guard. [1a]

In both matters of martial and spiritual, the Phoenix Guard take their lead from their Anointed of Asuryan. These learned sages were once Phoenix Guards themselves, but over the centuries have chosen to immerse themselves in Asuryan's teachings. Much of their existence is spent within the Chamber of Days, learning the lessons of past and future. Only when destiny stands upon a tipping point will an Anointed of Asuryan leave the shrine, sent thither to bear witness on the Creator God's behalf, and bring hope to his mortal children. Where the Anointed tread, the doubts and fears of their allies vanish like mist on the wind. Blows that should prove fatal are turned aside at the last moment, enemy axes shatter on contact with shields and dark sorceries collapse inward at the moment of casting. [1a]