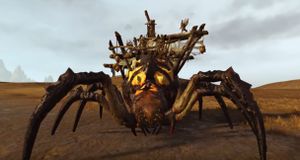 An Arachnarok Spider is a truly gigantic creature, able to overpower even formidable Giants and corrupted Cygors. These creatures live in the deepest forests, where Forest Goblins worship each one of them as a living god.[1]

This worship pays off a hundredfold in times of war, for the Forest Goblins are able to persuade the spider to fight for them. In combat, its many mandibles will rend apart the enemy, the deadly poison making every strike truly lethal. Should it encounter a rival monster, like the aforementioned Giant, then it is will literally inflate it with great quantities of deadly venom, instantly downing it. As if that was not deadly enough, its Goblin worshippers often bedeck their god with a giant howdah, which, besides carrying many temples dedicated to the bearer, makes an excellent firing platform for Goblin archers. In fact, it is not uncommon to see a primitive catapult, known as the flinger, at the forefront of the howdah.[1][2]

However, even a beast like that can simply be swarmed with superior numbers, and so any Greenskin commander lucky enough to have it in his army will foresee this and move the arachnid into the nearest forest or indeed, behind any nearby obstacle, allowing their eight-legged god to attack the enemy horde piecemeal.[2]