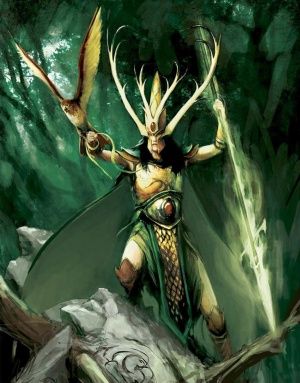 Araloth the Bold,[1b] sometimes called Araloth of the Hooked Blade[1a] was the lord of Talsyn and the royal champion of Ariel.[1b] He was later revealed to have been the consort of Lileath herself, fathering her divine daughter and inheriting her new realm during the End Times.[3]

Araloth was known for being particularly brave. However, this was not always so. He was once a cowardly noble who shrunk from battle and only enjoyed hunting. One night while he was out, he found himself thrown off his horse and separated from his companions. Hopelessly lost, he wandered for hours. When the moon had just risen, he wandered into a clearing. What he saw there was a four-armed daemon and the elf-maiden it was torturing. Forgetting his fear, he charged into the glade with his hunting spear and slew the daemon. After the daemon had been killed, the maiden revealed herself to be an unknown goddess. She bestowed three gifts on him. The first was he would be freed from his fears. The second would be his first-born daughter; to be a saviour. The third she did not tell him.[1b] Araloth became a great hero to the elves and a mighty warrior, his hunting hawk, Skrayn became his most trusted companion over the years, and gained the title "Eye Thief."[1b]

In 2246 IC, it was he who led out the hunt for the vile Beastman, Morghur and slew him at the Battle of Arden.[1a]

In autumn 2524 IC, he lead an army of wood elves into Sylvania to rescue Alarielle's daughter from the clutches of Mannfred von Carstein. He did not do this out of self-interest, but because Ariel had ordered him to.[2a] However, while in Ghoul Wood, they were ambushed by Kalledria, Queen of Sorrows, a banshee who was one of Mannfred's lieutenants. After dispatching the undead, Araloth was greeted by the goddess he had met so many years ago. She conversed with Araloth for a long time, but eventually Araloth announced to his men that the fate of the everchild was no longer in their hands. The goddess created a portal to another realm, and the elves walked through.[2b]

He was later revealed to be the father of the goddess Lileath's daughter. As the Warhammer World was dying, he and his child were sent to a new world, inhabited by Lileath's mighty Grail Knights. The pair ascended to godhood in Lileath's place, inheriting her mantle to preserve the races of elf and man[3].