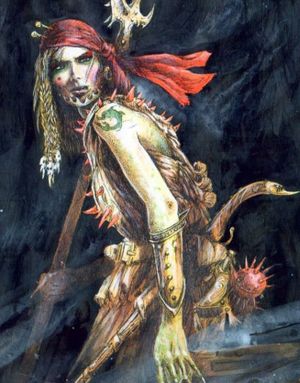 Aranessa was born in Norsca, to the chieftain of the coastal settlement known as Skjold. Desiring a strong male heir, the chief was incensed to have sired not only a daughter, but also a mutant - Aranessa was born covered in spines, with webbed fingers, scaly limbs and legs that merged into a fan of flesh below her knees instead of feet.[1a]

The people of Skjold killed their mutant children, so Aranessa's father was only too happy to throw his newborn daughter into the merciless sea before the sun had even set on the day of her birth.[1a]

A school of daggerfish are said to have then borne the infant to a sandy cove, where she was cared for by a trio of ocean spirits known as sea-nymphs. Surviving on a diet of gymmcrabs, algae and black kelp, Aranessa quickly learned to spear-fish, and before her tenth birthday, she was catching sharks, fanged rays and even mermanticores. Every dawn saw a new gift from the sea wash up on the beach near the cave in which she lived, allowing her to decorate it with numerous shells. Every month a new ship would wreck close to her cove and she learned everything she could from what knowledge these ships contained while enjoying the other spoils that she took from their broken hulls.[1a]

Eventually, Aranessa resolved to venture out into the world. Knowing that she would be persecuted for her mutations, she drank a lot of rum and amputated her 'fin' with a cutlass, cauterizing the resulting stumps and binding sawfish rostrum to them with leather belts. Venturing out onto the ocean in a rowboat, Aranessa encountered and was picked up by the crew of a galleon named Swordfysh.[1a]

Aboard the Swordfysh, the girl was an object of fascination. She killed anyone who touched her and was initially unable to talk (having had nobody to talk to until that point), but she took position in the crow's nest every day and excelled as the ship's lookout. Over the next decade, Aranessa became a brilliant pirate. She became an excellent navigator, and every course she plotted resulted in a windfall of loot; she became a skilled fighter and cannoneer, never losing a duel, and never missing a shot. The crew saw her as their lucky charm and she eventually became the Swordfysh's first mate.[1a]

After the captain was eaten by sea-gargoyles, she replaced him, and under her leadership, the Swordfysh became a hunter of Norscan reavers. Aranessa earned the moniker 'Saltspite' for her vengeful attacks on her former people. She was eventually approached by the Imperial Fleet, who wanted to commission the famed hunter of Norscans to help them fight against the forces of Chaos as a privateer. She opened fire on the Imperial ships, refusing to be beholden to them.[1a]

Known by the pirates of Sartosa as the Queen of Tides, in 2522 IC Aranessa was present when an undead attack on Sartosa left it's port in flames. Battling alongside a former lover - Captain Jaego Roth, she and her crew were eventually forced to flee in the face of overwhelming numbers. Not long after, and being chased by the skaven ship known as the Skabrus, she met Roth again, who offered her a share of his vast, stolen wealth if only she would help him defeat the vampire Count Noctilus, commander of the Dreadfleet and the one responsible for the attack on Sartosa. Plagued by dreams every night suggesting that Noctilus needed to be destroyed, and tempted by the offer of treasure, Aranessa agreed.[1a]

The Swordfysh and the other ships helping Roth attacked the Dreadfleet off the coast of Tilea near Luccini. The attack failed, the Dreadfleet got away and the Swordfysh had lost almost a hundred crewmembers to ghosts and had to be repaired after a hole had been blasted in it's hull.

Resolved to strike at the Galleon's Graveyard itself, Aranessa struck first in a raid on the Forbidden Citadel, a fortress built atop an island on the outskirts of the Graveyard. Aranessa was briefly captured by the Citadel's undead garrisson, but freed herself and cut a bloody swathe through it's forces to return to the Swordfysh and her crew just as Roth joined the attack. Pushing through to the maelstrom at the heart of the Graveyard, Aranessa rammed the Curse of Zandri, and sank the Black Kraken before she was sucked into the maelstrom, where she is presumed to have died.

Aranessa, as well as being an accomplished and skilled pirate, was also seemingly blessed by Manaan from birth. Many of her peers believed her to be the daughter of the sea god himself. She was particularly agile, able to perfectly balance on her sawfish blade legs while performing acrobatic feats in the midst of heated combat. Her dreams appeared to be prophetic, perhaps sent by Manaan.