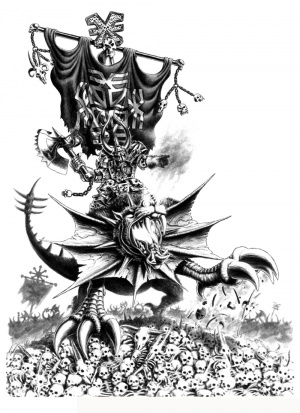 Arbaal the Undefeated is Khorne's most favoured follower and one of the deadliest beings to walk the Old World. [1a][2a]

Countless thousands had fallen beneath his bloodthirsty axe and their skulls still pile the base of the Blood God's mighty throne. A relentless fury of destruction and blood-letting descends on Arbaal whenever he waded through his foes in battle - no one had ever been able to withstand his attacks. He is was ever aware of the eyes of Khorne upon him, knowing that should he ever flee a battle, the terrible wrath of his patron deity would descend upon him and turn him into a Chaos Spawn. Thus is the punishment for failure.[1a][2a]

Arbaal always rode to battle on a mighty daemonic mount - the largest and most powerful Flesh Hound of Khorne. He was blessed with the Wrath of Khorne, which made him nearly unstoppable in close combat.[1a]

During the Siege of Praag it was Arbaal who finally broke the gates of the city with his powerful axe, beginning the slaughter he would go on to slay thousands of its unlucky defenders. He would survive the final great battle of Kislev which saw the death of many of the dark gods greatest followers, such as Valnir the Reaper and even the mighty Everchosen, Asavar Kul.

Arbaal would participate in the End Times, acting as the mightiest of Archaons followers, when he was instructed to defeat the Elven armies of Caradryan all believed that he would stand triumphant even against the living Incarnate of Fire. Khorne's greatest follower would finally be defeated however, slain during an epic duel with the Incarnate in which he could of won, had his arrogance and hubris not betrayed him.