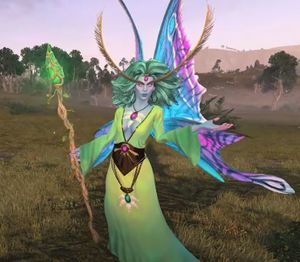 Ariel is the queen of Athel Loren and avatar of the Elven goddess Isha. Prior to the Winter of Woe she was a sorceress; the wisest and fairest of her kindred. Along with Orion, she was claimed by the forest following the Great Council and returned as the embodiment of Isha, whilst Orion returned as the avatar of Kurnous and slaughtered the Orcs who had invaded Athel Loren during that long winter.

Every winter Ariel takes the ashes of Orion, and seals them along with herself to slumber within the Oak of Ages, until the first day of spring when she awakens and Orion is reborn.

The ties her Handmaidens have with her make them stronger than their male counterparts.