Armies of the Empire 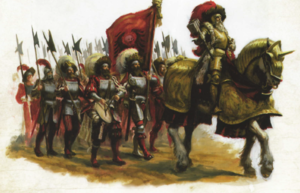 The Empire boasts the most powerful military in the Old World, composed primarily of a standing army of professional infantry regiments. Each Grand Province and City-State of the Empire is responsible for the creation, training, and provision of its own army. These provincial armies are supplemented in wartime by the Empire's various independent military, religious, and magical organizations.

Every Grand Province and city-state of the Empire is expected to recruit and maintain its own standing army for the defense of its lands. These are highly trained professional soldiers trained to fight together in regiments. In times of war, Elector Counts may call for a conscription of able-bodied men to form militia units to bolster their armies.

The Knightly Orders are independent brotherhoods of warriors recruited from among the Empire's nobility. They adhere to strict codes of chivalry and rigorous martial training. Knightly Orders may be secular in nature, like the Knights Panther, or may devote themselves to a particular god. These orders, such as the Knights of the White Wolf and the Knights of the Blazing Sun, are often known as Templars. An Elector Count may petition a Knightly Order to join him in battle, but ultimately the decision rests with the Grand Master of the order.

The Pistolkorps is funded by the Emperor and the Imperial College of Engineers, and is sponsored by several Knightly Orders. It recruits nobles too young or inexperienced to join a Knightly Order or command an Elector Count's regiments. Members of the Pistolkorps form units of light cavalry that are trained by their instructors to perform hit-and-run maneuvers on the enemy's flanks.

The Imperial Gunnery School at Nuln:

Since the founding of the Colleges of Magic by Magnus the Pious, the Elector Counts have called upon the aid of the eight Orders of wizards in times of war. The Empire's foes all too often employ the powers of fell sorcerers in their ranks, only the wizards of the Colleges have the ability to combat them. Although each Order varies greatly in the Lores of Magic they wield, all of them harness arcane powers that can alter the course of battle.

The cults of Sigmar and Ulric maintain a strong warrior tradition as befit their gods. The devotees of these cults will often accompany the Empire's armies into battle, where their presence lifts the morale of the faithful.