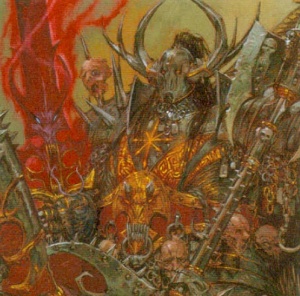 A great warlord and Everchosen of Chaos, Asavar Kul led an enormous chaos horde to the civilised lands of the old world and destroyed Praag in horrors undreamed by men and only recalled by Dwarfs in ancient nightmares.

He was killed mysteriously during the siege of Kislev, where his army was attacked and destroyed by three others: the army of Magnus (split into two) and the defenders of Kislev (which included a contingent of dwarfs from Karaz-a-Karak). Many beleive he was betrayed by one of his own cowardly Generals.

The Realm of Chaos is a place polluted with evil sorcery. It is a nightmarish landscape from which hordes of bloodthirsty marauders, iron-clad champions, mutant monsters and vile Daemons launch their attacks upon the world. This war-wracked land lies far to the north of the Empire. However, when the Winds of Magic blow strongly, the Realm of Chaos expands; the Northern Wastes are swallowed up and the armies of Chaos pour down through Troll Country into Kislev and the Empire. The furthest the Realm of Chaos has ever expanded in the history of the Empire was during the Great War Against Chaos, which began in the year 2301 IC.

Having risen to prominence among the northern barbarian tribes over many years, Asavar Kul was the most powerful champion of the Dark Gods to have ascended in an age. With his nightmarish armies finally united, he moved southwards, fuelled by the growing tide of Chaos. Daemons moved with them, sustained by fresh tides of life-giving magic, and herds of Beastmen rampaged unchecked through the forests. In the heartlands of the Empire, evil sorcerers and worshippers of the Chaos Gods emerged from their secret conclaves to attack human society from within. As winter engulfed the Old World, the Chaos armies struck. The northern lands of Kislev were quickly overwhelmed.

An army of Kislevites and Ostlanders mustered to face Kul and his unholy allies, but it was crushed north of the city oi Praag. Nothing, it seemed, could stop Kul’s murderous advance, and despite a fierce battle at the bridges of the River Lynsk, the Empire and Kislevite forces were massacred and Kul’s forces crossed the last barrier between it and Praag.

The Siege of Praag

The Siege of Praag lasted until late 2302 IC, with the city’s brave defenders hurling back their attackers time and again with desperate heroics and stalwart bravery. As winter set in once more and the year drew to a close, Praag finally fell and the hordes of Chaos ran amok within its walls. The raw power of Chaos engulfed the city and Praag was changed forever, its survivors fused together in hellish and inhuman shapes. Living bodies melted into the wails of the city itself so that it became impossible to tell flesh from stone. Distorted faces peered from walls, agonised limbs writhed from the pavements, and pillars of stone groaned with voices that issued from once human lips. Praag had become a living nightmare and a grim warning of the suffering that lay ahead for all if the warriors of the Dark Gods were victorious.

Remnants of the defeated Kislevite army fled south, spreading the word of their defeat. As the Empire readied itself for a full-scale invasion, a leader arose from the horror of these troubled times: Magnus, a noble of Nuln. He would later become known as Magnus the Pious because of his unflinching devotion to the Cult of Sigmar and to the ideals of nationhood that Sigmar still signified in the divided Empire. Magnus was a magnificent orator whose rousing speeches raised a massive following among the common folk of the Empire. He marched northwards from city to city, addressing the people in the market places, gathering about him an army the likes of which had not been seen for centuries. The Elector Counts and Burgomeisters were shrewd politicians and recognised Magnus as a powerful leader, quickly realising that they could gain much prestige and political power by supporting him. Soon, the soldiers of the Elector Counts and the noble warriors of the Empire’s Knightly Orders marched alongside Magnus’ citizen militia, and by the time the army reached Middenheim, it was the single largest force that had ever been assembled in the history of the Empire. Magnus was forced to divide his troops into two armies, as no single territory could provide enough food and water to support all of them.

The first army, consisting mostly of vengeful Kislevite lancers and glory-hungry knights, rode with all speed to Praag hoping to arrive in time to relieve the siege. They arrived too late, however, and found only the horror that Praag had become. Mustering their courage, they turned south to wreak their vengeance upon the Chaos horde’s rearguard.[2b]

The second army, led by Magnus himself, marched to the city of Kislev, hoping to resupply at the capital before continuing onwards. While travelling north, the army was joined by an unexpected ally in the form of Teclis, greatest of High Elven mages, who had heard of Man’s fight against their common foe, and now pledged his incredible powers to Magnus’ cause. Upon reaching Kislev, Magnus discovered the city already under bloody siege by Asavar Kul’s dark army, with but a few Kislevites and a large contingent of Dwarfs from Karaz-a-Karak desperately fighting to defend it. Huge, leather-winged monsters and warp-spawned Daemons swarmed the battlements and giant horned beasts assaulted the city wails beside hordes of iron-clad warriors. Kislev could not hold much longer and Magnus knew that if the city fell, the Empire would surely be next.

Marching amidst the ranks of the common soldiers, Magnus immediately ordered his warriors to hold their banners aloft and charge. Concentrating on the trapped defenders, the Chaos army was ill prepared for this fresh assault, and they were scattered by the sudden attack. Grim-faced regiments of state troops drove a wedge deep within the Chaos host, supported by hails of crossbow bolts arid thunderous volleys of handgun fire. Artillerymen from Nuln, amongst the very first warriors to flock to Magnus’ griffon-emblazoned banner, deployed in commanding positions overlooking the battlefield and then wreaked a terrible toll on the Chaos forces. Regiments of Chaos Warriors, knights and foul Dragon Ogres were all cut to bloody ribbons by the artillery fire. The battle went well for Magnus initially and victory seemed assured, but Asavar Kul was a mighty leader and rallied his warriors to counter attack. Before long, the greater numbers of the Chaos force began to tell, and Magnus’ army was gradually pushed back into a defensive circle. Horrifying Daemons slaughtered entire regiments with razor talons and brazen, spell-forged blades, while evil sorcerers unleashed powerful, ancient magic. Teclis, and a handful of human wizards he had recently trained, fought against the sorcery of Kul’s shamans in magical battles that burned the skies with lethal energies. The Dwarfs inside Kislev attempted to break out to help Magnus, but they were contained and forced back behind the city’s walls. Magnus’ army was surrounded and it seemed that the fate of the Old World was sealed.

As Kul’s warriors fell upon Magnus’ army in the final attack, the Kislevite lancers and Imperial knights returning from Praag appeared over the ridge of what would become known as the Hill of Heroes, and they thundered into their enemies with hatred burning in their hearts. The Dwarfs and remaining defenders charged once more from the city and Magnus seized this last, desperate chance to lead the men of the Empire forwards in glorious battle. The Chaos hordes faltered, as they suddenly faced no less than three armies, and began to stampede in every direction, bewildered and confused by this new turn of events. The Kislevites were driven to wild fury by the destruction they had witnessed in Praag and the host of Asavar Kul was slaughtered by the implacable anger of the combined forces. The magic of Teclis and his human apprentices immolated entire regiments of mindless Chaos Spawn and dozens of blood-crazed Chimerae, while frenzied Manticores were struck from the skies by sorcerous thunderbolts. The army of Chaos was shattered and thousands of its warriors were hacked down as they turned to flee in utter rout. As the witches and sorcerers of the Chaos host were cut down, the foul magic binding the Daemons to the mortal realm was severed and the unholy creatures exploded into mists of blood and clouds of flies.