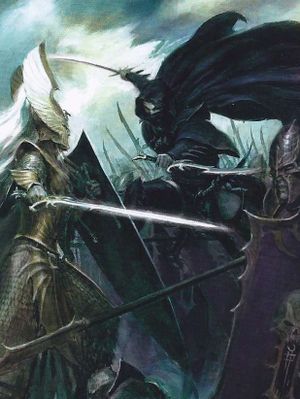 Assassins are perhaps the most feared adepts of Khaine, Lord of Murder, and an essential feature of Dark Elf society.

The Witch Elves, priestesses of the cult of Khaine, sacrifice some Dark Elves during Death Night, taking their victim's children. They are then offered up to Khaine, submerged in a Cauldron of Blood with the few that survive considered chosen by the god. [4a] These children are indoctrinated (i.e.: brain-washed) by the Witch Elves and ruthlessly trained, with the males becoming Assassins, the females Witch Elves. [3a] [1a][5a]

Anyone wealthy enough may hire an assassin to eliminate a rival or an enemy in Naggaroth. The authorities will not punish someone merely because he hired an assassin; assassination is an accepted fact of life in Dark Elf society and a means of weeding out the weak and foolish. Malekith himself uses them to dispose of those lords and ladies who dare question his authority. [1a]

Some Admirals also hire them to cause terror in advance of their raids or to train their Corsairs whilst a Dreadlord might enlist them to ensure loyalty to him or her in their regiments. Assassins are often skilled torturers and interrogators, able to keep a captive alive for many days and extract information more effectively than the renowned dark elf torturers. [6a]

They follow a single aspect of the thousand-faced god of murder, always striving to be more like their deity. [1a]

Young assassins spend their first ten years training in the bloodfields of the Temples of Khaine, those that survive graduating to the major temples in Har Ganeth or Naggarond and are tuaght by a particular master, each with their own skills and techniques. [5a]

They operate mostly alone, but are quite able to conceal themselves inside a regular Dark Elf infantry unit, just waiting for the right opportunity to kill an enemy champion amidst the confusion of battle. [3a]

Dark Elf Assassins favour the use of Black Venom[3a],Black Lotus, Dark Venom and Manbane Poison with which they often coat their weapons. [6a]

In the 2nd Edition, Assassins were the children of Witch Elves who if they survived being immersed in a cauldron of Khaine would become an adept of the Temple, trained in the arts of disguise and murder. [2a]