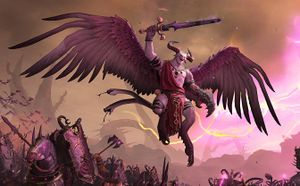 Azazel, Prince of Damnation is a Daemonic champion of the Chaos God Slaanesh.[1]

Azazel was once a mortal man, born Gerreon of the Unberogen tribe, the twin brother of Trinovantes and the younger sibling of Ravenna. At the brothers' birth, a seer predicted that only one of the twins would know both the greatest pleasure and the greatest pain.[3a] When Trinovantes fell in battle with orcs during an expedition led by Sigmar, the King's son, Gerreon blamed Sigmar for issuing the orders that sent his twin brother to his death (Gerreon had not been able to take part in the expedition because of a broken wrist inflicted in a brawl with one of Sigmar's sword-brothers the day before). In spite of Sigmar's oath that Trinovantes had chosen to stand his ground and died bravely, Gerreon was inconsolable and swore revenge against Sigmar.[3b] Under the guidance of a hag seer, Gerreon pretended to forgive Sigmar and swore friendship and loyalty to him, and soon became a valued member of Sigmar's retinue, since his skill with a sword was unrivaled.[3c] Gerreon himself grew so close to Sigmar that he began to feel conflicted, recognizing the nobility in Sigmar and his brethren, and beginning to doubt his oath to seek revenge.[3d]

Nevertheless, six years after Trinovantes's death, when Sigmar was twenty-one, Gerreon struck, wounding Sigmar with a poisoned sword blade and running his own sister Ravenna (Sigmar's betrothed) through the belly. Gerreon disappeared, and Sigmar hovered near death for several days, before recovering from the poison.[3e]

Making his way north as a fugitive, Gerreon found asylum with the survivors of the Norsii, who had been annihilated in battle with now-King Sigmar and his allies. A sorcerer of the Norsii had foreseen the coming of one who would become a great champion of Chaos, and anointed Gerreon with a new name: Azazel.[3f]

He is now a mighty champion of Slaanesh, having pledged his eternal loyalty to the Dark Prince and been granted daemonhood in return. He has become the highest general of Slaanesh's armies and gained the ability to see into the very hearts and souls of mortals, revealing their hidden desires and most perverse pleasures. Few have ever managed to oppose Azazel, as most who set out to challenge him are convinced by his silver tongue to join the Prince of Chaos instead.[1]

Legends tell of Templars of Ulric, zealous men who vowed before the Flame of their god to bring down Azazel or to die trying. Before they could land one blow on Slaanesh's daemonic general, they had been reduced to gibbering imbeciles, slaves to the slightest whim of Azazel and his master. Another tale tells of a Questing Knight called Guido de Brionne who kneeled before the Daemon Prince before he could issue his challenge and had his head cut off while not moving an inch, utterly convinced of the justification of the act.[1]

According to Warhammer Armies: Champions of Chaos (5th Edition), Azazel was once the chief of the Gerreon tribe, one of the twelve great human tribes united by Sigmar.[1] In Graham McNeill's novel Heldenhammer, however, Gerreon was Azazel's mortal name, and he was formerly a member of the Unberogen tribe (Sigmar's own).[3a]