Bögenhafen is a bustling market town in the Grand Principality of Reikland of the Empire, sitting at the highest navigable point of the river Bögen. [1] 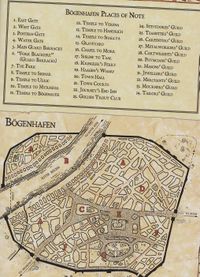 In 2203 IC a Daemon horde emerges from a rift at Castle Drachenfels and destroys the town. [5a]

The town sent militia to join the Emperor's army at Altdorf and very few returned, generating a labout shortage in the market town. Trade with Marienburg also suffered as that city was nearly cut off by the ongoing fighting in the Sea of Claws, whilst any trade with the northern Empire has been massively disrupted. Some merchants have been ruined but others, especially those who dealt in the metals used in warfare have made new fortunes. [3a]

Its market trades goods from Altdorf, Marienburg and Nuln for local wine and wood and also serves as a hub for the sale and distribution of lead and silver from mountain mines. [1a]

The town is proud that it has fully functioning sewer system, maintained by the Masons' Guild, but this has also proven a useful route into the city by smugglers. The Watch sometimes hires people to sweep the sewers for such criminals. [2a]

The town is part of the Barony of Saponatheim, whose seat of power is Castle Grauenburg, about twenty five miles to the north of the town itself. In 2510, the current baron is Wilhelm and he has little interest in its day to day running or much else beside his own country pursuits. [1a]

The town watch is based in a pair of barracks, one of each side of the river and form which they send out patrols of 4 men each equipped with clubs, leather jacks, daggers and helmets, whilst any sergeants have mail armour and swords. They all wear a yellow tabard with the coat of arms of the town. [1d] Any who are arrested by the watch will be taken back to the cells in the barracks, resisting arrest is dangerous as they will not risk injury merely to take potential criminals alive. Trials will take place when a magistrate (often a member of the town council) is available and witnesses and/or evidence is available. If the accused can afford a lawyer, they may hire one, otherwise they are almost certain to be found guilty. An appeal can be made to the liege lord of the barony, but unless the accused is a friend, influential or has the ear of someone who is, the Baron will not normally interfere. [1d]

There are temples to the following gods in the Göttenplaz: Bögenauer, Handrich, Myrmidia, Sigmar, Ulric, Shallya and Verena. The graveyard and chapel to Morr lies outside the town walls as does a shrine to Taal. [1c]

Day to day administration of the town falls to the council, mainly made up of representatives from four powerful merchant families. The head of the council is normally one of the Merchants and from one of the big four houses. There are fifteen seats in total and these are made up of: [1a]

Other notable figures may be called to assist the council as required and can be given a vote by agreement of the main council. Such people can include other local Priests or the Captain of the Watch. [1a]

Each spring, people from across the Reikland flock to Bögenhafen for the Schaffenfes, a three-day fair, great attraction and a highlight of the town’s calendar. Not just a huge livestock market, the town becomes home to dozens of stalls and sideshows. [4a]

The 4th edition Warhammer Fantasy Roleplay Rulebook states that the town lies in the Duchy of Graf Wilhelm von Saponatheim rather than a Barony.