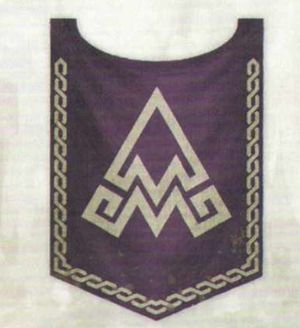 Barak Varr, Gate to the Sea[9a] is a Karak of the Dwarfs located in the Border Princes.

Approaching from the land, it is impossible to tell that it is a busy port. In fact, even when standing on the cliff edge it seems that the ships are destined to smash into the cliff face. However, the fierce tides of the Black Gulf have carved out an enormous cave system, and it is in these caverns that the Dwarfs harbour their trading fleet.[1]

A relatively small Karak, Barak Varr holds tremendous strategic importance. The single seaport of the Dwarfs, it is a key commercial centre of the Old World. Merchants from every realm, from Araby to Lustria, gather at Barak Varr, knowing they can expect the legendary hospitality of the Dwarfs to refresh them on arrival.[1][9a]

It is a major trading centre, where bargains are made between traders from many lands. In the market area of the Hold a visitor can buy anything, from fine Araby silks to exotic Lustrian statues, and from Halfling-mixed spices to fertility charms from the Southlands. The lion's share of goods exported from Barak Varr to places such as Tilea, Bretonnia, and the Empire pass through the city's heavily-fortified docks.[1]

The Dwarfs of Barak Varr enjoy a relatively cosmopolitan lifestyle. Although the lands of Barak Varr technically include all of the ports, docks, and anchorages that line the easternmost limb of the Black Gulf, what most mean when they refer to 'Barak Varr' is the Great Cove, the massive port facility hewn deep into the Cliffs of Gamrud.[1]

Barak Varr is the home to a part of the Engineers Guild called the Sea Engineers, who specialise in the building of enormous iron ships.[1]

The stronghold is almost impervious to attack by land. Any invaders would first be confronted by the armies of the Border Princes. If they are overcome then there is no way into the stronghold as the approaches run through tunnels well set with thick gates, cunning traps and solid defences.[1][9a]

Attack from sea is even more difficult. The immense firepower of the Dwarf fleet, coupled with the massed cannons that cover the cliff face and the Anvil of Doom overlooking the harbour mean that any attacking fleet would be almost instantly destroyed.[1][9a]

Before the War of Vengeance, many elf ships traded at the port city bringing goods from the Far East and West and Barak Varr grew quickly as its wealth increased. It also began to experiment with sea going vessels, creating ships with rotary sails like the Ghazen-Harbark and also paddle ships. [6a]

When Snorri Halfhand marched on Kor Vaneth at the start of the War of Vengeance, the throng of Barak Varr where given the honour of breaking the city gates as part of their vengeance for the death of Agrin Fireheart, with the Sootbrow Clan of miners leading the work. [10c]

The armies of the necromancer Kadon marched on the hold but were repulsed by its iron walls and eventually retreated. [8a]

The current king of Barak Varr is Byrrnoth Grundadrakk. He is known for maintaining traditional Dwarf values, including the practice of sending Beardlings to Karak Kadrin to complete their education. Visitors wonder if Barak Varr will continue to be open for business, but such is the respect he has earned amongst his people that their support for his rule is absolute and without question.[1]

An uneasy alliance is formed with the High Elf Sea Lord Aislinn in 2281 IC against Waaagh! Gutrippa but although together the two fleets proved unstopable, destroying the greenskins, the alliance soon after broke apart with unintended insults on both sides. [4a]

The fleet of Barak Varr engages and destroys one of the Skaven fleets raiding the coasts of Estalia and Tilea in 2321 IC. [7a]

When five Black Arks invade the gulf, king Grundadrakk seals the city and brings his ships back into the safety of the city deciding that the Dwarf fleet is outmatched. [3a]

Between 2418 and 2518, Barak Varr's fleet faced Archaon in the waters of the Black Gulf while he was looking for the Crown of Domination. Archaon's fleet met strange ironclad vessels that belched smoke and fire. Barak Varr's fleet was defeated and Archaon made the seaport beardlings pay in torture.[2]