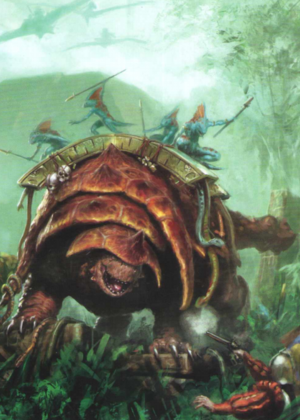 Bastiladon, sometimes known as Living Bastions, are a mighty and hulking species of armored reptiles whose heavily armoured shell is perhaps one of the strongest within the continent of Lustria. [1a]

It is a walking fortress, a living bastion covered in a rock-hard bony skin, and then further protected by massive iron-like plates — a natural armour so dense that it can, sometimes, thwart the bite of the mighty Carnosaur. Even those blows that crack the outermost armour plates cannot penetrate deeply into the beast due to the Bastiladon’s alternating layers of thick leathery skin and additional scales.[1a]

Because of its nigh impenetrable armour, there are few predators in Lustria that will dare to attack a Bastiladon. Such formidable protection, however, does come at a cost, for the Bastiladon is a lumbering and ponderous creature, slowed down by its own dense weight. The largest threat to a Bastiladon comes not from the prowling gargantuan carnivores, but rather the quicksand and boggy mud that can be found throughout the steamy jungles.[1a]

Even on solid ground, the heavy tread of the armored beast leaves deep prints, and should one wander too deeply into a swampy area it can all too easily become hopelessly mired. This is exactly how the Skinks have come to trap Bastiladons — using all their wits to subjugate and then train the beasts.[1a]

When threatened by a formidable opponent, the Bastiladon attempts to stomp lesser creatures with its enormous clawed limbs and its impressive and extremely heavy bulk, driving their bodies deep into the ground and smearing what remains into the dust. While its incredible bulk and cumbrous shell will never allow the creature to build up a thunderous impact like that of the mighty Stegadon herds, the Bastiladon is still a formidable fighter whose true abilities relies heavily on fighting on the defensive.[1a]

When these creatures tries to fight back against its opponents, its hawkish beak delivers a bites that can cleave a full-grown bola-bola tree in two or sever an armored knight and his entire horse in half. The Bastiladon’s best weapon, however, is on the end of its long and heavily muscled tail - a massive knot of compacted bone covered over with armored plates and bony stubs. This mace-like protrusion can be swung with such devastating momentum that it can shatter granite or pulverize man-sized opponents into oblivion, leaving only blood-splattered craters to mark where they once stood. Even the largest of creatures must respect this bone-breaking bludgeon for the impact can truly break the ribs of any Lustrian apex predator that would dare to attack a foe so armored and armed.[1a]

When ridden to war, the Bastiladons carry with them some of the treasured weapons of the temple-cities. Their incredibly thick and armoured hides allow them to carry devices which other beasts, even the revered Stegadon, steadfastly refuse. These revered and holy objects are mounted upon the great beast’s back so that they might be activated to smite any who dare set foot in sacred Lustria.[1a]

For example, the Ark of Sotek, or Twin-headed Ark, is a device that was first used in the Skaven Wars by the order of Tehenhauin himself. It is a sacred stone artefact lifted upon the Bastiladon’s armoured back. In appearance, it is a stone basin engraved with symbols venerating Sotek. As the Bastiladon pounds towards its enemies, the Skink crew activate these glyphs and, perhaps most importandy, rake the coals beneath. From out of the Ark’s sacred confines pour forth an endless supply of serpents, blessed by Sotek (or at least enraged by the heat) and eager to attack the nearest foe. While some beasts would understandably baulk at the multitude of snakes, it is the red-hot coals that cause creatures to refuse to carry this sacred device. Such is the thickness of a Bastiladon’s armour, however, that it does not even notice the blazing fires stoked on its very back.[1a]

Like many Lizardmen devices, the apparatus at first seems to be quite simple, but the magic is twofold. Firstly, by Sotek’s blessings, the enraged serpents swarm out and strike at those nearby; yet, miraculously, the snakes only ever attack the enemies of the Lizardmen. The second inexplicable thing, although few foes ever live long enough to realise it, is that the Ark never runs out of snakes. Whether they are summoned from the surrounding flora or created by eldritch means is irrelevant; the serpents continue to issue forth, like water from a well. So many vipers, asps, and snakes of all kinds writhe near the Ark that those swarms of diminutive reptiles accompanying the Lizardmen army grow ever larger in its presence.[1a]

Upon need, the eldritch and inexplicable artefact known as a Solar Engine is taken from its secure chamber deep within the confines of a pyramid-temple and manoeuvred onto a Bastiladon’s carapace. Skink Priests declare that the Bastiladon is favoured by Chotec — the Lord of the Sun — and that this creature alone is worthy to carry the Solar Engine. Whether this is true, or if the hoary Bastiladon is simply the only jungle creature that will bear the superheated device upon its back, is unknown. When activated, the arcane machine radiates invigorating rays that stir nearby reptilian creatures to energetic new heights of action and violence. When the attending Skink crew intone the correct blessings to Chotec, the Solar Engine also blasts forth a beam of intense heat, which burns the foe like the condensed rays of the sun itself.[1a]