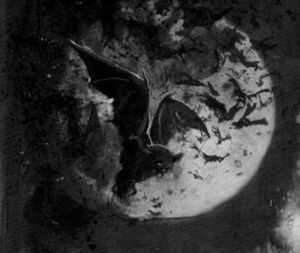 When the armies of the vampires goes to war, the skies above them are often obscured by a multitude of bats. These living clouds blot out the light of the sun and moon alike, purposefully swathing the battlefield in darkness, the better to confound and demoralise the living. As battle commences, hundreds of these animals descend on the enemy, battering and clawing at eyes and hands in order to distract the foe.[1a]

Mutated by the dark magic that saturates the ancient towers and caves where they roost, these bats can grow so large their wingspan can be as wide as a man's outstretched arms. In dark clouds, they descend upon the enemy, chittering and biting and generally making concentration impossible. When numbered in their scores, they can tear the skin from a man and strip the flesh from his bones in a few heartbeats.[1a]