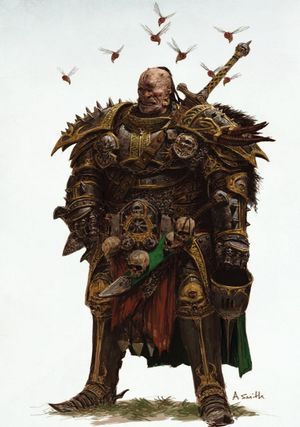 Bayl of Many Eyes

Bayl of Many Eyes is a Exalted Hero of Nurgle of the Sarl. [1d]

Straight backed, tall and powerful despite his long service to Nurgle. [1d]

Unlike most of the his tribe, Bayl is devoted to only one god - Neiglen, the Fly Lord, the Plaguefather - Nurgle. Others of the Sarl worry that to worship only one of the dark pantheon risks costng the greater tribe the favour of the other gods. [1b]

He has led his warband south from their homeland to not only kill in the name of their god but also seeking a hidden library of forbidden tomes detailing diseases forgotten for centuries. [1a] It is said that it can be found in the Southlands and is in the possession of a creature called Skrolk who is curating the texts. Retrieving it Bayl hopes to achieve Daemonhood. [1b]

At full strength, he can field a formidable force of about 60 Chaos Warriors, 20 Chosen and 16 Chaos Knights. [1c]

Many additional eyes opened on his head and hatched into flies who he can still see through. [1d]