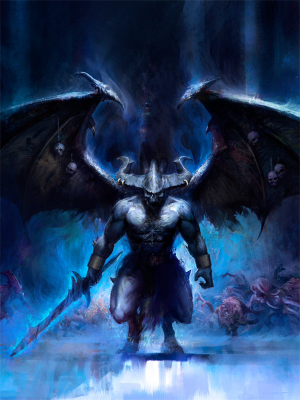 Be'lakor, The Dark Master is a Daemon Prince of Chaos. He is known by several names: The Harbinger, One Who Heralds the Conquerors, the Foretoken, the Bearer are a number of examples.[2a]

At the dawn of time, Be'lakor was blessed by all Chaos gods. In the time before the rise of the Elves against Chaos, Be'lakor held the world in an iron fist, commanding hordes of daemons in the name of Chaos. As absolute ruler of the world, Be'lakor began to look upon mortals with disdain. His arrogance led to his downfall, incurring the ire of the Dark God Tzeentch, Changer of the Ways. The Lord of Magic cursed Be'lakor and stripped him of his power, denying him physical form and forcing him into mindless subservience to Chaos. As a final twisted curse, Tzeentch forced Be'lakor to become the Harbinger, the one who would crown the Everchosen. Tzeentch granted the hate-filled spirit access to the secret paths to the Crown of Domination - an ancient battle helm that was the symbol of the Everchosen, attainable only by running a gauntlet of Daemons and Chaos Spawn at the First Shrine to Chaos, deep in the Blade's Edge Mountains. But Be'lakor would never wear it himself...a fact that incensed him more than his bodiless state.[1a]

Be'lakor first conducted his dark coronation thousands of years before the rise of Archaon. The first Everchosen, Morkar the Uniter, had risen a great army and, with the blessings of the Dark Gods, was given the task of making the world a permanent beacon of Chaos. Screaming his rage to the winds, Be'lakor descended into his own realm of madness - not seeing the battles won by Morkar, nor the rise of the man who would be a great bane of Chaos, Sigmar. Sigmar met Morkar in combat in a battle that would determine the fate of the world. The battle was likened to that between gods, but in the end Sigmar struck the killing blow, destroying Morkar and ending his incursion. From the ashes of this battle, Sigmar became the first Emperor of the united human tribes. For thousands of years since, his Empire has endured as a beacon of humanity.[1a]

Because of the fickle nature of Chaos, Be'lakor was able to avoid fulfilling his hated role and possessed the body of Kharduun the Gloried, the second Everchosen. With a physical body at last, Be'lakor morphed the mortal form into a being known as the Shadowlord. However he was trapped in the ruins of Mordheim.[2a]

Hundreds of years later, Asavar Kul the Anointed became the next Everchosen, leading a campaign of death and destruction through the decadent and corrupt lands of the Empire. However, as in ages past, a champion of light rose to challenge Chaos at Mankind's darkest hour. Magnus the Pious, the future Emperor of Sigmar's Empire, joined with Ar-Ulric Kriestov and High King Alrikson to oppose the tide of Chaos coming from the north, led by Asavar Kul and Engra Deathsword. During the siege of Kislev, Magnus and Asavar Kul met in single combat, just as Sigmar and Morkar had millennia earlier - and, like that titanic battle, the Everchosen was again destroyed.[2a]

Be'lakor, watching from the heavens, screamed in fury as the chosen conqueror again fell in combat. He knew that if the Dark Gods had not cursed him, he would have destroyed Sigmar himself millennia earlier - and the multiple Everchosens would not have been required.[1a]

Be'lakor was subject to another End Times prince when Archaon started to subjugate the northern tribes while claiming the necessary relics to be named the Everchosen. Be'lakor held the Crown of Domination, and was the only one who could conduct the coronation - and only the Everchosen could receive the crown.

Be'lakor, in his guise as the Dark Master, had planned to take the Crown of Domination for himself, gather enough power to gain physical form by holding Albion in his grip, then descend on Archaon and feast on his soul in the view of the Dark Gods. However, his plans fell apart and, his immortal spirit filled with fury, Be'lakor was once again forced to perform the dark coronation. Descending like a dark angel, Be'lakor knelt before Archaon, hatred and rage filling his soul. He would once again be on the sidelines in the next great Chaos War.[1a][2a]

Be'lakor claimed the body of Volkmar the Grim, Grand Theogonist of Sigmar, slain by Archaon in a past battle. Be'lakor strung the former Grand Theogonist to his banner for the rest of Volkmar's new unlife. Be'lakor then led a force of daemons from the Realm of Chaos into battle against the Empire, in order to draw Emperor Karl Franz's army off from assisting the exalted Valten's forces in battle against Archaon.[1a]

Under Be'lakor, the daemon hordes slaughtered the bulk of Karl Franz's army. However, the High Elves under the banner of Teclis, the emissary of the Phoenix King, arrived on the field. Teclis was accompanied by three hundred of the vaunted Swordmasters of Hoeth and several magical relics designed for fighting the forces of Chaos. Be'lakor turned his forces against the Swordmasters, allowing Karl Franz to march on to Archaon's forces and usher the end of the Everchosen's campaign. Be'lakor at first gained the upper hand, losing many daemons but inflicting far grueler casualties against the High Elves.

Teclis saw this plight and decided to use one of his most potent spells. He whispered incantations into a sphere in his hands, and an ethereal flame spread from his form, engulfing everything daemonic on the battlefield. While no daemons were killed, everything bearing the Mark of Chaos, including Be'lakor himself, was sent back into the Realm of Chaos.[1a]