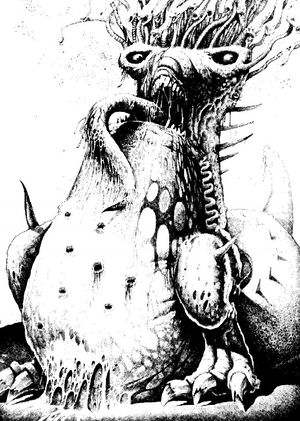 The Beast of Nurgle, the Gu'nagh'ghyran, also known as Slime Hounds and Nurgle's Lapdog are daemonic creatures of Nurgle. [1a]

They bear the look of an amalgam of living creatures fused into one nightmarish being. The Beast has the soft and sticky body of a pale slug, webbed feet which flap uselessly, a face of writhing green tentacles, and a whiptail growth that bursts from its and back and which wags from side to side.[1a][2a]

The creature's appearance mirrors its deadliness: its touch causes paralysis to those unfortunate to encounter it, and its slimy trail rots everything in its wake. The presence of the Beast is enough to kill small animals or to age or to decay larger ones. In short, the Beast is the embodiment of death and decay. [1a][2a]

In contrast to its sickening appearance, seen by mortals as an essence of mindless decay and horrid rot given putrid flesh, Beasts of Nurgle exemplify the Plaguelord’s endless enthusiasm and excitement for forces of life and death. [1a][2a]

They are known as Nurgle's Lapdogs, Putrid Bounders, Slime Beasts, Tentacled Plaguedogs. [2a]

Beasts view Plaguebearers as their masters and are eager to please, often beginning a battle alongside them before their excitement at meeting new firends overcomes them and they bound off to great their new playmates.[2a] The Beast is driven by its craving for attention, greeting newcomers by slobbering all over them with its tentacles. This attention poses no threat to other creatures of Nurgle, but it proves fatal to mortals. Once its new playmate has stopped moving, it shifts attention to another victim. In this way, in its excitement it leaves a trail of death and destruction. [1a][2a]