A Gor Beastmen leader wins a duel. Notice the shaman on the left.

Beastmen are partly human and partly animal creatures. Their minds too are a hybrid of man and beast; although they have the intelligence of humans, they employ it with the savage cunning of a wild animal.

Main article: Origins of the Beastmen

Beastman are known as the Children of Chaos, and this is true quite literally, for they are unnatural creatures, born from men and beasts when Chaos first brought its scourges upon the world in the cataclysmic Time of Chaos.[3a]

Throughout the world, Beastmen thrive upon the edges of civilization, raiding isolated farmsteads, villages, and other settlements. They are most numerous towards the north, such as the dark forests that cover The Empire and the harsh wildernesses of Kislev. They are found in the greatest numbers throughout the Chaos Wastes of the northern and southern polar regions. 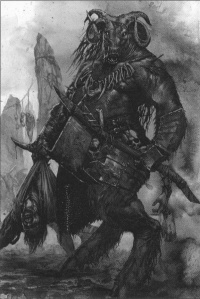 A Gor, the most numerous type of Beastman.

Beastmen live in nomadic bands lead by Beastmen Champions of Chaos. Beastmen have a natural empathy toward Chaos which overcomes any hatred they may have towards other races, so that Beastmen bands often ally themselves to other forces of Chaos, small bands even joining the ragtag warbands of mutants and renegades lead by non-Beastmen Champions such as humans and fighting their battles. 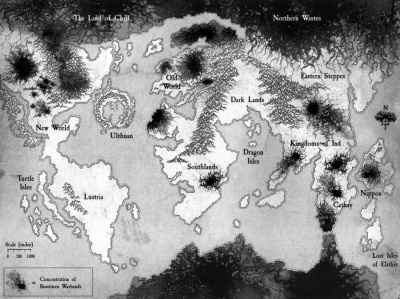 A map of Beastmen concentrations in the Warhammer World[2]

As befits such a primal and warlike race, the only social unit is the warband, called the warherd.

Each warherd is led by the most powerful and intimidating Gor, the Wargor. The most powerful Wargors dominate several warbands and are known as Beastlords. The spiritual leaders of the warherds are the Bray-Shamans, who speak the will of the Chaos Gods.

The rivalry between different warherds runs deep. On occasion some or even many warherds are united by a ruthless and powerful warlord into a large savage horde. Although a rather undisciplined force, when led by a proper leader they can be very dangerous indeed.

Warherds are nomadic, living in temporary camps hidden within wildernesses such as forests. Caves near running water and with a good view of the surrounding terrain are considered the ideal camps. Eventually, after raiding nearby settlements, the warherd moves on, establishing a new camp some distance away. Clashes often result between two warherds over a particular territory.

A warherd comprises the many breeds of Beastmen as well as the other allied Creatures of Chaos such as Dragon Ogres, the monstrous Minotaurs, Centigors, and Chaos Warhounds. Beastmen generally disregard the use of anything but close combat weapons, as their instincts in battle are almost purely on closing with the enemy and fighting in direct combat.

Bestigors, the largest and most ferocious Gors, are supplied with the best armaments of the warherd, and usually wield halberds in battle.

Most Beastmen seem to worship Chaos as a whole. However some of them worship one of the four major gods.

Beastmen warherds who devote themselves to a single God acquire mutations which eventually shape them into the favoured images of their patrons.

All such devoted Beastmen will mark themselves with the rune of their patron deities, carving or daubing the symbols into their armor, and painting, branding or tattooing them onto their skin and fur.

The Bray-Shamans are able to wield Dark Magic and use the lore of the wild.

Some beastmen wizards can regain magical power by consuming the brains of enemy wizards but this only increases their lust for such tender flesh. [3a]