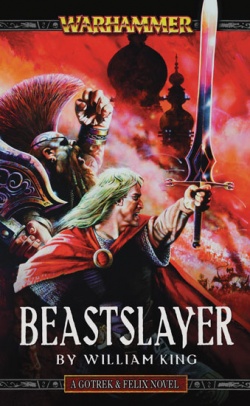 This article is about the novel by William King. For other meanings, see Beastslayer.

Beastslayer is the fifth novel in the Gotrek & Felix (novel series) by William King.

The storm clouds are gathering over the icy city of Praag as the evil forces of Chaos lay murderous siege to the frozen lands of Kislev. Standing between the massed hordes of darkness and the city's destruction are dwarf slayer Gotrek Gurnisson and his sworn human companion, Felix Jaeger. But Gotrek's quest to die a heroic death in battle may soon be granted as the enemy advance to claim the city for their dark gods.

Beastslayer is set entirely in Praag, where Gotrek, Felix, Snorri, Ulrika, Max, Bjorni and Ulli await the attack of a huge Chaos army led by Arek Daemonclaw that is besieging the city. During a sortie beyond the walls Gotrek and Felix encounter Villem, younger brother to Praag's ruling noble, Duke Enrik, and after repulsing an attack on the battlements Gotrek and his axe draw the attention of Arek Daemonclaw himself, who consults with his sorcerous advisors Lhoigor Goldenrod and Kelmain Blackstaff. The twin sorcerers show Arek a series of visions which includes the dwarf god Grimnir forging Gotrek's axe, its time as part of the history of Karak Dum, its loss within the Chaos Wastes and finally its discovery by Gotrek. The visions also allude to the circumstances in which Gotrek became a Slayer, and predict Arek's death at Gotrek's hands. Disturbed by this, Arek orders his cultist allies within the city to assassinate Gotrek and Felix.

At a secret meeting of cultist leaders, a high-ranking man going by the false name 'Halek' is tasked with eliminating the duo, though all of the cultists are encouraged to kill them if they get a chance. A witch-hunter named Ulgo attempts to pick a fight with Gotrek in the White Boar tavern where the group are staying, implying that he is a cultist in disguise, but Gotrek swiftly beheads him. Meanwhile, Grey Seer Thanquol's captivity at Hell Pit is interrupted when Lurk Snitchtongue, who has been magically manipulated by Kelmain and Lhoigor, escapes imprisonment and incites a populist uprising, throwing Hell Pit into chaos. Thanquol is released on the condition that he help Clan Moulder quash the rebellion, and through spying on Lurk's thoughts Thanquol is able to tip the Moulders off about the rebels' plans. Lurk's uprising fails, and he flees.

A pair of assassins attempt to kill Felix one night while he is out for a walk but Felix manages to surprise them, killing one, while the other falls on his own poisoned knife after a struggle. Felix warns the Slayers and they investigate a brothel the assassins mentioned called the Red Rose, where Felix learns that the assassins' employer was a noble from the palace. Bjorni and Ulli begin to frequent the establishment. Arek Daemonclaw allows the followers of Nurgle within his army to infect Praag with a plague and Ulrika falls deathly ill, but Max is able to cure her. One night he senses a large build-up of magical energy and the spirits of Praag's dead emerge on the streets, terrifying the inhabitants. Gotrek, Felix, Max and Snorri discover some cultists poisoning a grain silo and slaughter them, before going to the palace to warn Duke Enrik of the plot. Enrik is impressed with Max's magical knowledge and makes him one of his advisors. Meanwhile, Ulrika's father Ivan Straghov leads his horse warriors to a muster at Gospodar ford, where Tzarina Katarin is gathering her armies to ride to Praag's aid. Clan Moulder also sends Thanquol forth with an army to investigate the build-up of magical energy, and both forces converge on the Chaos horde.

Increasingly desperate over his failure to kill Gotrek and Felix, 'Halek' sends some underlings to kill the brothel girl Felix spoke to in order to cover his tracks. However, Bjorni is with her when they attack and he turns the tables on them, allowing the Slayers to take a prisoner. The group interrogate him and discover that Villem is the cultist leader behind the assassination attempts. Gotrek and Felix rush to the palace, but are too late to stop Halek/Villem who has decided to assassinate his brother. However, at the last minute Villem has a change of heart and sacrifices himself to save Enrik from his own underlings, buying Gotrek enough time to kill them and save the duke.

Against the advice of Kelmain and Lhoigor, Arek begins his final attack on the city. Chaos Sorcerers within the army summon a large number of daemons, and although Gotrek's axe proves able to destroy the daemonic siege towers employed to take the walls, the defenders are forced to fall back and abandon the outer city. A splinter section of the Chaos horde attacks Thanquol's force, embroiling the skaven in battle. Felix and the Slayers stay on the walls to meet their dooms, but a catapult stone strikes the wall near them and flying debris knocks Gotrek unconscious. Felix and the other Slayers take him to a temple of Shallya where he is healed, and they begin fighting through the streets as Arek loses control of his army and the invasion devolves into a senseless ruck. The Spirit of Grungni arrives piloted by Malakai Makaisson and begins raining alchemical fire onto the Chaos army, while Ice Queen also arrives with her forces and attacks the horde from behind. Sensing defeat, Kelmain and Lhoigor abandon the army. Ulli is killed by a beastman, and Felix rallies the defenders to Gotrek's side. Arek Daemonclaw, his plans unraveling through his own errors of judgement, enters single combat with Gotrek. The Chaos Lord is about to win when Snorri and Bjorni barrel into him from behind. Arek lashes out with both weapons, killing Bjorni whilst Snorri only just manages to block, but this gives Gotrek the opening he needs to kill Arek. With their leader dead the Chaos army panic and retreat, the daemons dissipate and Duke Enrik links up with the Ice Queen to drive the foe from Praag, winning the battle for the forces of order.