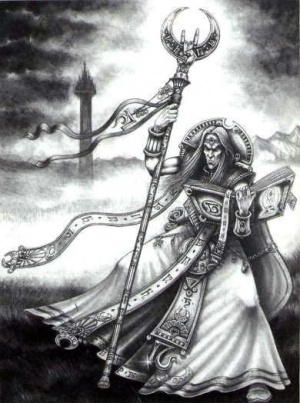 Belannaer the wise is the oldest living Loremaster of Hoeth and second in the hierarchy of the White Tower. [2a]

As a young prince in the days of Bel-Hathor, Belannaer vainly sought to find the entrance to the White Tower. Only when he despaired and turned back to find wisdom on his own did the Tower allow him passage. He studied there for a long time and became the favourite pupil of High Loremaster Cyeos. [2a]

He was one of the wizards that shrouded the shore of Ulthuan in magical mists following Norse raids. [2a] and repaired the waystones damaged by Grom the Paunch. He also was a companion of Finubar on his journeys to the east, and the tutor of Teclis. When Teclis left the White Tower to search for his brother Tyrion, it was Belannaer who convinced Cyeos to give him the War Crown of Saphery. [2a]

Belannaer spent the subsequent years compiling and studying the reports of the Swordmasters, uncovering Druchii spies and plots. [2a]

He finally died in a magical duel against Mannfred von Carstein in 2524 IC, fighting alongside Eltharion the Grim to save Aliathra the Everchild and the thwart the vampire's plans to resurrect Nagash.[1]