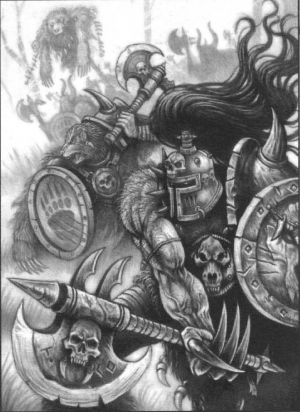 Beorg Bearstruck, known also as Beorg, Son of Bran, is a mighty Champion of Chaos, mercenary and chieftain of the Ursfjordings, known also as the Tribe of the Bear, or as they are more commonly known by those they kill: the Bearmen of Urslo, who roam the world as Dogs of War for hire.

Within the savage tribal holdings of Ursfjord, in the Chaotic northern wasteland of Norsca, resides the great thatched Hall of Urslo. Built of strong timbers, it is within this mighty feast-hall that Beorg Bearstruck and his fierce Marauders dwell, when not off raiding and pillaging the lands of the Empire and beyond. Like most of the tribes of Norsca, Beorg and his kinsmen are deeply affected by the power of Chaos, seeing such as the favour of their unholy masters. These 'blessings' have caused the Ursfjordings to become as much beast as man, and all bear the unholy marks of the Were to some extent; gaining massive, rending claws, jagged teeth and brutal, ursine faces. Consumed by unholy bloodlust, these Chaos-tainted madmen have sown terror across a thousand battlefields for the esteem of their gods and the sheer love of battle.

When Beorg, Son of Bran, snapped the necks of Uldsdau and Graille, twin sons of Huern, Jarl of the Tribe of the Wolf, the Gods saw fit to bestow upon the Marauder their considerable favour. As Beorg threw himself against his enemies, his back arched and split, while his ribs cracked and turned in upon themselves inside his body and his face twisted into a feral, bestial muzzle. The gift of the Were was upon him this day, the gift of the Dark Gods to the Norscan people. He was now the Chosen of the gods and Lord amongst his people. He was now the Bearstruck.

When the armies of the Warlord, Archaon began to marshall against the southern heathens, Beorg was amongst the first to pledge his life to Archaon's banner. He cared little for the so-called 'civilised' world, and had long despised the weakness of the Empire that they dared to deny the Dark Powers. What was moreso, he and his warriors had long since tired of easy conquests amongst the weaker northern tribes, and desired a battle more worthy of their caliber as warriors. At the Battle of the Monoliths, it was Beorg and his Ursfjordings who led the armies of Chaos against the forces of Archlector Mannfred of Nuln. The Sigmarites were horrified to see their foes twisted and writhing until they took on the mien of terrible bears twisted by the powers of Darkness, snarling and rending like the savages they were. But amongst them, towering above them all was the great shape of Beorg himself, casting aside his foes with great swipes of his monstrous claws, tearing heads from necks and ripping arms from their sockets.

After the battle, Beorg had realized that the lands of the south had offered a greater opportunity for blood-letting than any of the battles of the North. His warriors slaughtered their way through the Empire, living by robbery and pillage. Eventually, Beorg and his warriors had made their way to the Border Princes. This was a time of great battles and much plundering, and in time, the fear and renown of Beorg the Bearstruck grew to gargantuan proportions. Every night, amidst the ruin of their foes, the Bearmen would drink and boast the way that only Northmen can, singing the sagas of their exploits and adventures. It was during one such instance of drunken revelry and bloody sacrifice that the Bearmen were beset by a horde of Orc raiders. Many were undone by the craven beasts' black arrows before Beorg strode forth and snapped the Orc chieftain's neck like a twig. During the battle, a young Marauder known as Oerl the Young was caught in the eye with a Goblin's arrow, leaving a deep scar riven across his face. Yet despite his injury, Oerl had nonetheless kept high the banner of the Ursfjordings; the Bear of Urslo, the skin of a massive, Chaos touched bear that Bran, Beorg's father, had slain to celebrate his son's birth. Impressed with Oerl's courage, Beorg granted the warrior gold and an honoured place on the battlefield -- at his side.

Beorg is a werebear of unbelievable power and strength. His mutation is a mark of great distinction and esteem amongst the tribes of the North, for while many amongst the tribe of the Bear carry mutations that bestow upon them some measure of the strength and ferocity of the bear, it is Beorg alone who wears the full shape of the werebear. He alone is Bearstruck, and lord amongst his clan. Though he eschews armour and weaponry as the need of weaklings, trusting in the strength of his claws and the blessings of the gods to see him to victory, the Bearstruck carries totems and artefacts of his clan that serve to invoke the darkling energies of Chaos and augment his fighting ability.

The Bear-Fang Talisman: This massive, yellowed canine is the sacred talisman of lordship amongst Beorg's people. He bears it about his neck. The talisman serves to ward off blows that would otherwise harm its wearer.

The Bear Banner: Beorg's battle-standard is borne by the hardy warrior, Oerl the Young -- a entire bearskin whose grizzly head leers out from the top. The skin is touched by the power of Chaos, and the blessings of the gods is such that the banner radiates an aura of rage that drives the already fierce Ursfjordings into a terrible battle-fury that is impossible to contain.