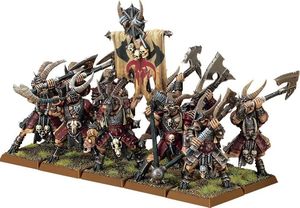 One of the Bestigor herds.[1]

Bestigors are the strongest and meanest of all Beastmen to make up warherds, far excelling humans in both strength and resilience. Amongst the Beastmen, they are the fiercest in fighting and destroying civilisation, and enjoy brutal overkill. It is in no way uncommon for their victims to be hewn apart in a single axe swing, then be trod into dust with heavy hoofs. It has been noted that these acts become much more common when Bestigors manage to capture and destroy the enemy standards, as for them, they are the finest products of civilisation which they so fiercely despise. It also appears to be very addictive, as the Bestigors become far more enraged and much less willing to abandon the battlefield with each shattered standard.[1]

Ironically, while the Bestigors hate civilisation so much, they also use one of its main products - metal - much more than other Beastmen, being clad in thick layers of plate armour and chainmail, as well as always wielding large, two-handed axes, all requiring considerable amounts of metal. Being so well equipped, not many foes are able to defeat them on the open battlefield. As such, they never lie in ambush like lesser Gors and Ungors, as the benefits for them are negligible and are far outweighed by the uncertainty of tracking.[1]