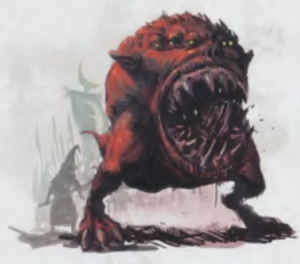 The colossal squig known as the Big Red 'Un was as large as a giant, and twice as hungry. It came up from the Shroom Pits long ago, and followed the Crooked Moons wherever they went. Skarsnik claimed that the beast had latched on to him because it knew he was Mork's appointed, a goblin fated for greatness. Before they were knifed in the back, a number of Skarsnik's detractors said the Big Red 'Un followed him due to the long trail of chained dwarfs he led the creature on with.