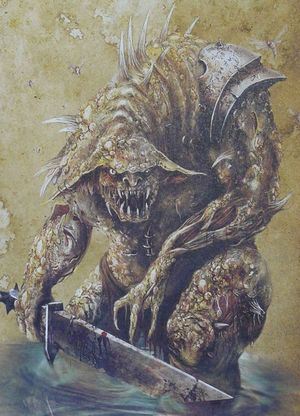 Bile Trolls are Trolls corrupted and tormented by Nurgle. [1a]

Unlike many followers and children of Nurgle, they are not immune to the pain of their corrupted flesh. [1a]

According to the Kul tribes, the creation of the first Bile Trolls can be traced back to the Troll Chief Raak Stoneshatterer, a beast of both huge appetites and unusual intelligence. [1a]

He challenged the Champions of Chaos, seeking favour from the Dark Gods and killed many until finally he fought the horde of Gulvas Bloatchild on the plain of Scorched Bones. They were once more triumphant but hungered from their exertions devoured the fallen warriors of Nurgle. [1a]

It is said it amused the Plague Father greatly to watch them being endlessly deovured from within but surviving due to their powers of regenration. Other trolls fear the decendants of Raak and shun them so as not to receive their curse. [1a]

They are shrouded by foul vapours which makes them hard to be target by weapons - missile or melee. Bile Trolls can vomit forth the disgusting stew of maggots and plague that lurks within their guts. [1a]