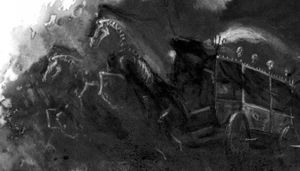 When a Vampire is 'slain', its body may crumble to dust, immolate, or otherwise disintegrate but for the most powerful Vampires, this does not necessarily signal their demise, for their wicked spirits can live on even in these frugal remains. If a Vampire's followers can gather the physical remnants and place them within the coffin, the unholy remains will be safe. This gives the Vampire's necromantic servants the time they need to perform certain rituals, enchanting a carriage to bear the remains of their lord while his mortal form slowly feeds upon the energies of death. [1a] [2a] [3a]

In ramshackle and garlic-hung taverns, grim tales are told of the Black Coaches that haunt the mountain passes. These morbid carriages are omens of disaster and death. They are horrific, unholy things, neither wholly real nor immaterial. A Black Coach is a herald of famine, war and murder, the sight of which can drive a sane man to suicide and cause families to fall upon themselves. Many an Imperial road warden or Bretonnian Knight has attempted to halt one of these ghastly apparitions and died for his trouble. [2a] [3a]

Black Coach's are driven by a Wraith and pulled to war by a pair of grisly Nightmares. Once on the battlefield, a Black Coach grows ever more powerful, feeding on magics wielded by mortal and immortal sorcerers alike. Driven on by the undying will of the Vampire couched within it, the Black Coach crushes or scythes down the ranks of the enemy without slowing. Legends say that the blood of a thousand mortals will bring the torpid vampire back to unlife. [1a] [2a] [3a]