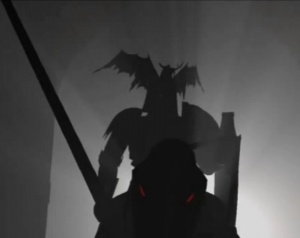 The Black Grail Knights were the resurrected corpses of twelve long dead Grail Knights of Bretonnia. Greater and more infamous than even the Blood Dragons of the time, they were among the mightiest undead to have ever walked the Old World.

Grail Knights are considered the ultimate human warrior, if they fall they are given grand funerals and their souls belong to the Lady of the Lake. This process meant that normally, Grail Knights were one of the few beings who could not be brought into undeath. Some however, particularly those whose corpses lay in Mousilion, were vulnerable. Even in the tainted lands of Mousillon, only a being of immense power could hope to molest the natural order of The Lady, that being was the ancient Dread King.[1]

Taking up their fortress in Mousilion, the Black Grail Knights would become legendary. They were extremely powerful warriors who fought relentlessly. Mounted atop the animated remains of their once noble warhorses, they could not be slowed by difficult terrain and would never flee from hand-to-hand combat. So deadly were the warriors, that many didn't even know they were knights, instead thinking that the "Black Grail" was an artifact of immense power and destruction. Many tried to defeat the undead order and all failed.[1]