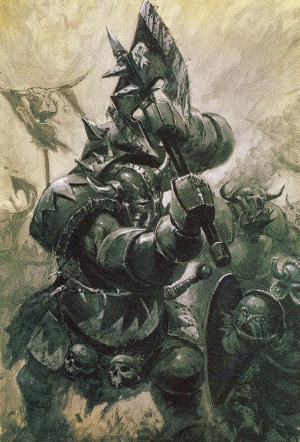 The first Black Orcs are created by Chaos Dwarf Sorcerers in -150 IC, who are hoping to make a race of super slaves, far more resiliant than the Goblins and Orcs that are already enslaved. However the Black Orcs prove to be far too indpendant minded and only 50 years later lead an armed revolt that rages through Zharr Naggrund, before they are driven back - Many of the surviving Black Orcs flee to the mountains. [2a][2b]

The Black Orcs' sturdy constitution would allow them to prosper in the harsh land of the Chaos Dwarfs where other Greenskins workers would perish. They first appeared in the Old World during Sigmar's time, as a whole tribe crossed the Worlds Edge Mountains and conquered other Orcs living in the hills to the northwest of Stirland. When Sigmar first united the Men of the middle Old World into the Empire, he first had to drive out the Orcs and Goblins that lived there. Those battles against the Black Orcs were by far the hardest fought, and only won at terrible cost to Sigmar's armies.