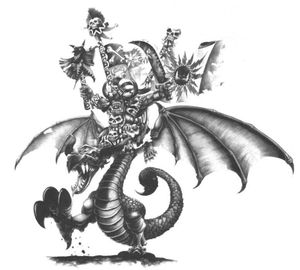 Black Tooth was the Orc Shaman for Grom the Paunch during his invasion of Ulthuan. [1a]

When he tapped into the waystone network he saw a thousand visions which created his divine mission but the power also became akin to a highly addictive drug. [2a]

Following a battle at Peledor Ford, he discovered a waystone which he saw was a conduit of massive power - he drew upon its energy [2a] and then flew into the night on his Wyvern. He rejoined the horde when it assaulted the fortress palace of Athel Tamarha, full of stolen power and as they destroyed the castle and the surounding lands he ordered all waystones be toppled so he could absorb more power. [1a]

As the campaign continued he stopped drinking and eating, never sleeping whilst his increasingly mad laughter sounding out across the camps. Power flowed through him, his eyes glowed and under the light of a full moon, he sought his future in a bowl of blood. He warned his master and old drinking buddy of the great army massing at Tor Yvresse but not of the damage he was doing by his drainig of the power of the land. [1a]

Reaching the city of Tor Yvresse, his magic draining had begun to effect the land and a vast storm gathered above them all. He flew his wyvern into the city to assault teh citys waystone and fought the Warden of the city atop his tower. A great conflict between them ended in the Warden having his flesh stripped from his bones and Black Tooth moved to shatter the waystone and claim even more power. [1a]

He moved to shatter the waystone that guarded the whole of eastern Ulthaun but was engaged by the recently arrived Eltharion - at the height of their conflict elves loyal to Eltharion completed the ritual of ending and stopped the flow of power to the shaman. Stunned by the sudden lack of power, Elthanrion claimed his head with his sword. [1a]